One year ago, we left Singapore and had to say goodbye to all of the friends we made there. Only one year spent there… and we were already packing for somewhere else. Of course we were really happy to fullfil our dream by moving from Singapore to the USA. But it also meant giving up all of our new habits and, most of all, being separated by thousands of miles from our friends.

When we arrived in California, the first weeks and months were naturally full of discoveries but also with a bit of loneliness. We knew it was part of the expatriation experience, but when the holidays arrived, being far from France and Singapore was quite difficult. During that time, the ocean seems impassable and for us it was not a “small small world” at all.

And unexpectedly, like a gift from Santa, we began to meet people here. And in the beginning of 2015, our social life got more and more filled. Now we know several families that we often meet and we celebrate together the big events, like Mimi’s birthday by instance. Most of them speak French, we are the same age and all parents of young kids. Some of them even live in Walnut Creek so we can regularly organize afternoons or evenings together and mummies can even meet at least once or twice a week. Of course kids are also very happy to make friends!

In this post, I thought that I would only share two important events with friends that happened during the past weeks, but actually it is the perfect occasion to write about how lucky we are to have all these people in our lives and thank them for being the ones we can count on here. Our life in California couldn’t be the same without them and all their kindness and help.

So here they are, my two big surprises of the last few weeks:

Diving into the last year of my twenties

One Sunday afternoon in late July, we’ve been invited by Bastien and Coralie to enjoy the pool of their condo with other friends. We spent a great time as Californian summer is perfect for outdoor activities like that. 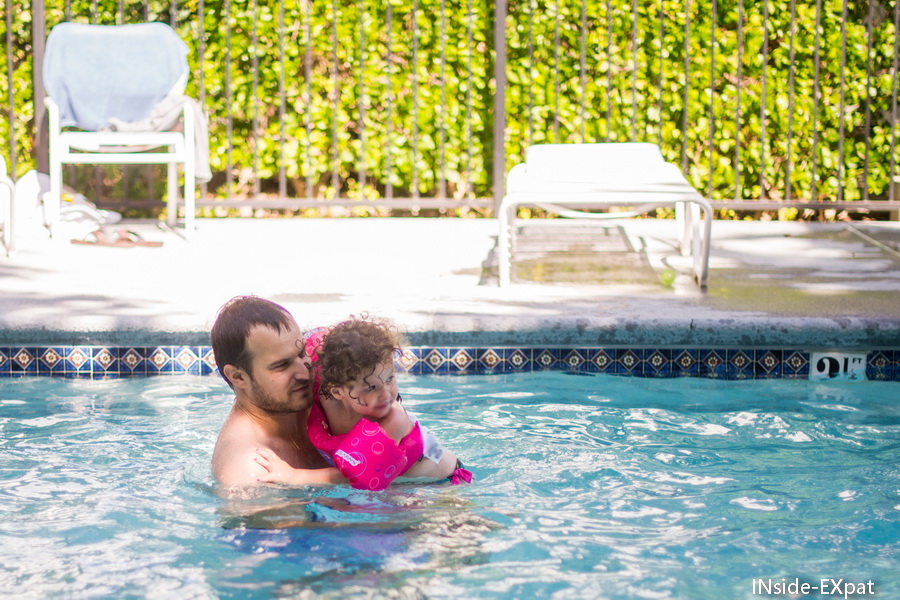 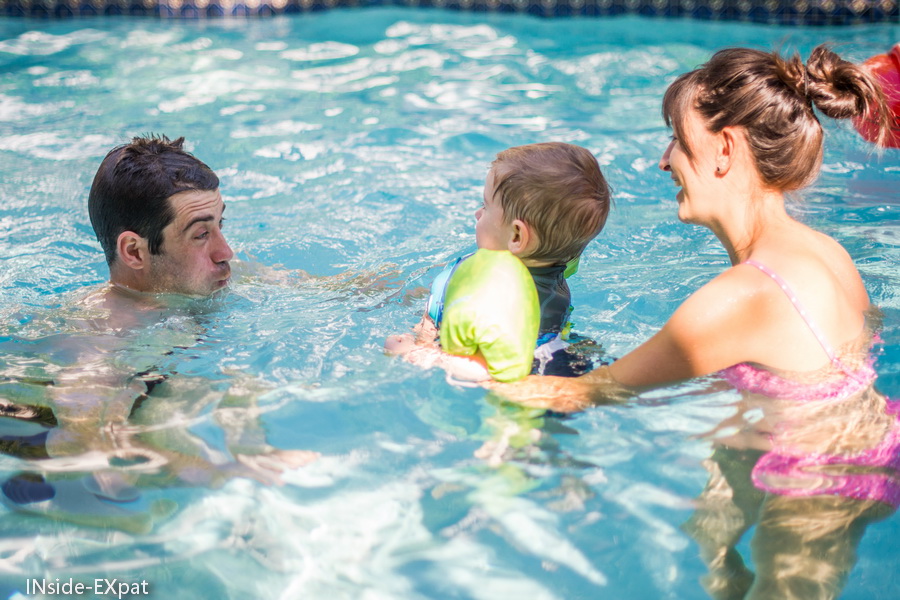 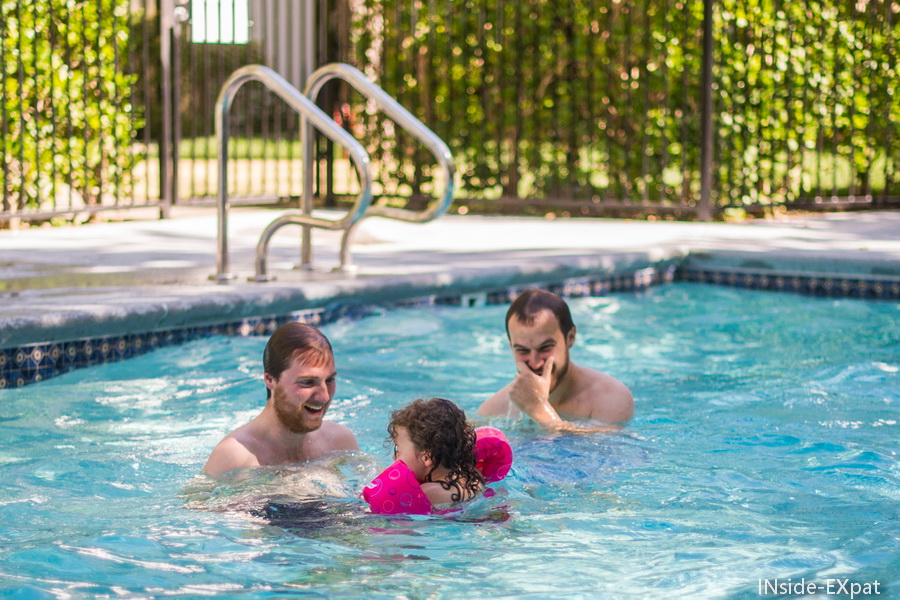 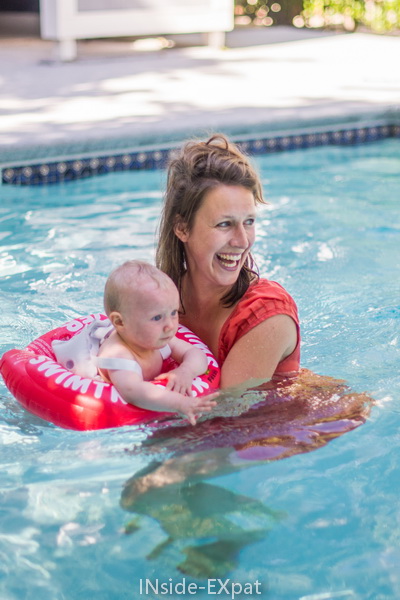 After having a blast in the pool, it was time to eat! Crêpes (thin pancakes), popcakes, cupcakes served with champagne (and alcohol free cider)… what a feast! 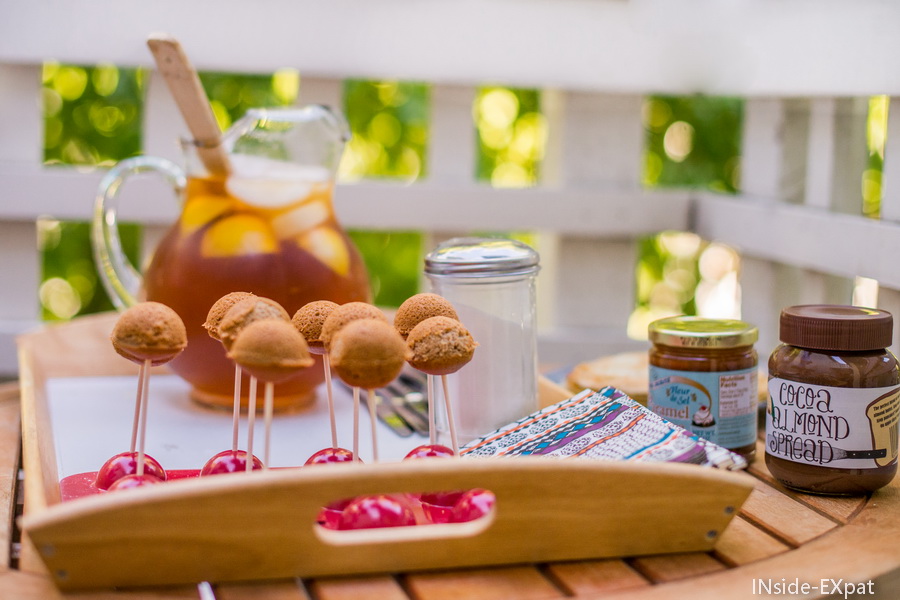 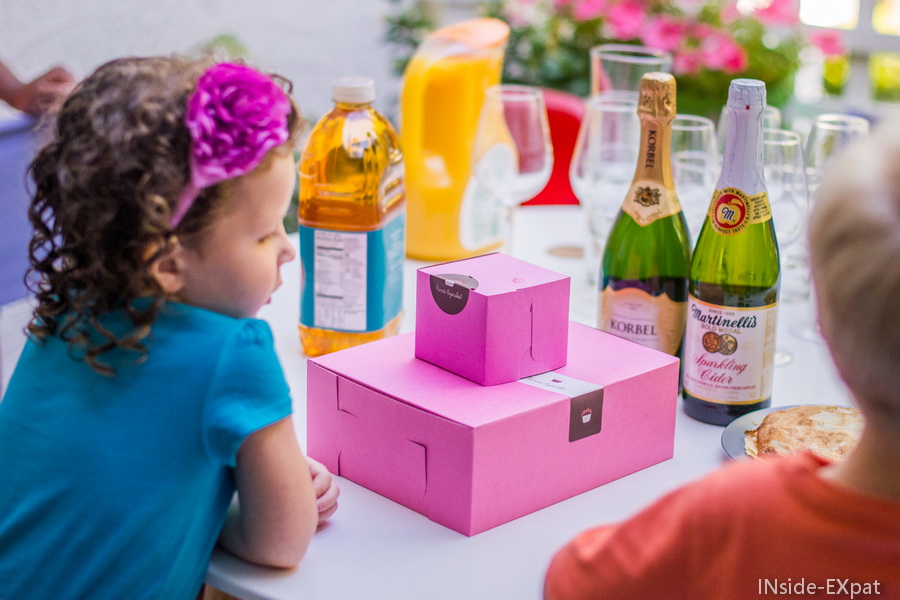 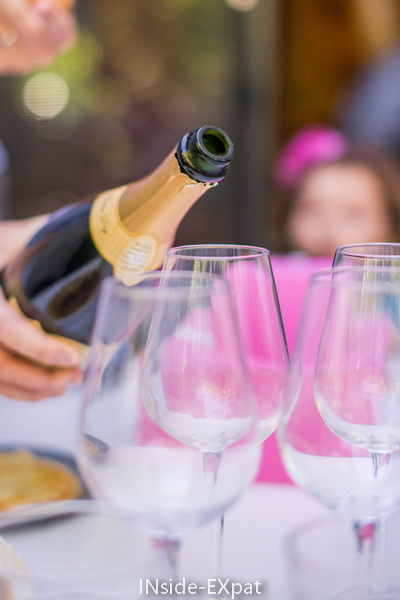 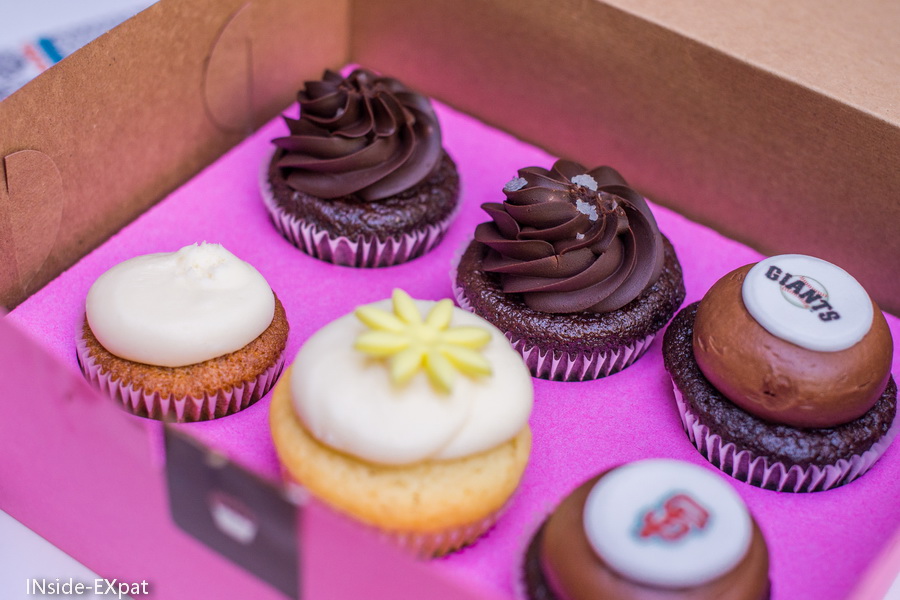 And also, a lovely birthday song and candles that I wasn’t expecting at all! What a nice surprise!!! 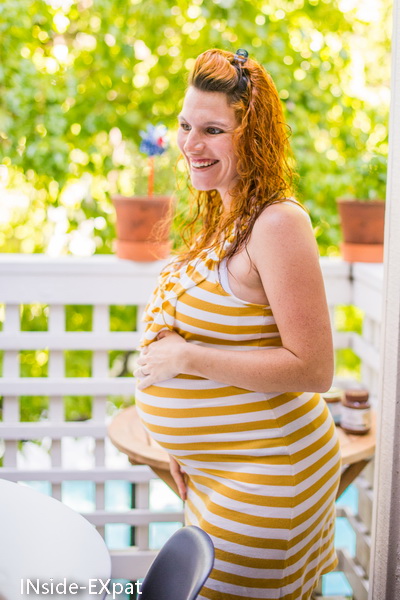 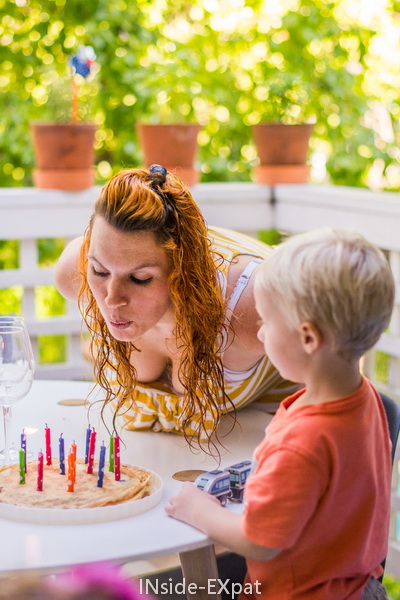 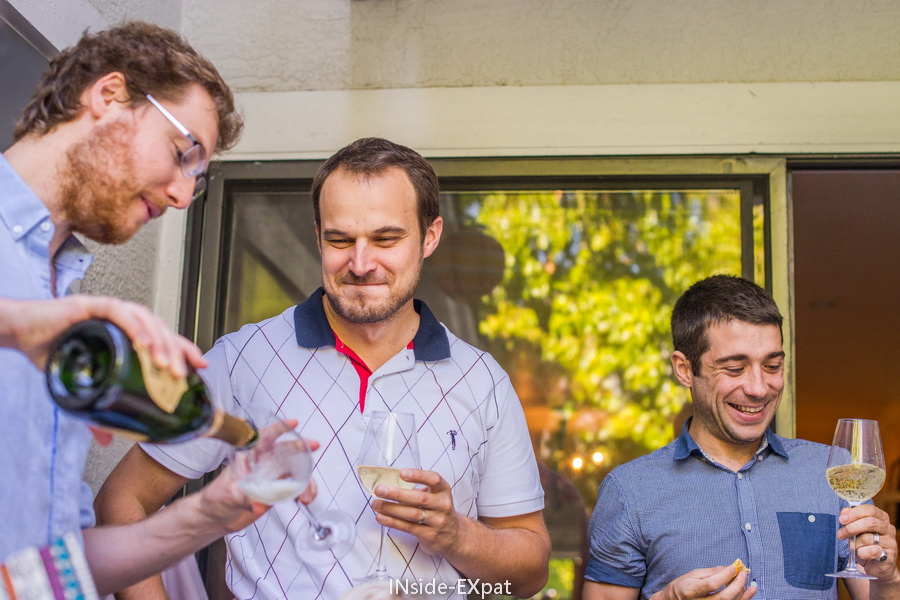 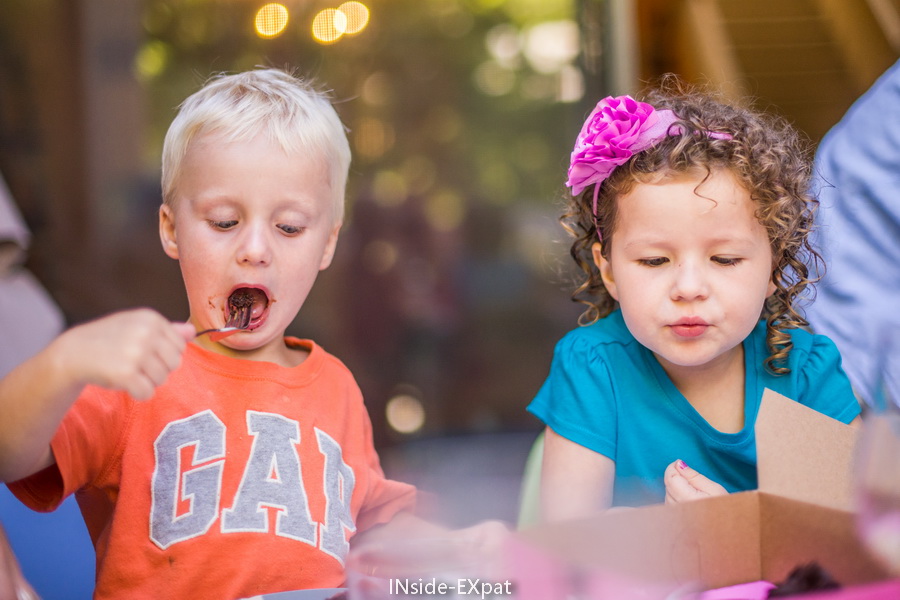 I was told that it was “Ladies Night!”…

A girls night or ladies night… it’s a night out for mummies during which dads take care of the kids. A night of laughter and chattering with a good meal and one (or several) drinks (with alcohol most of the time… well, all the time… except when you are carrying a little inhabitant in your belly…).

One previous time, we booked one of the community room in Bastien and Coralie’s condo. 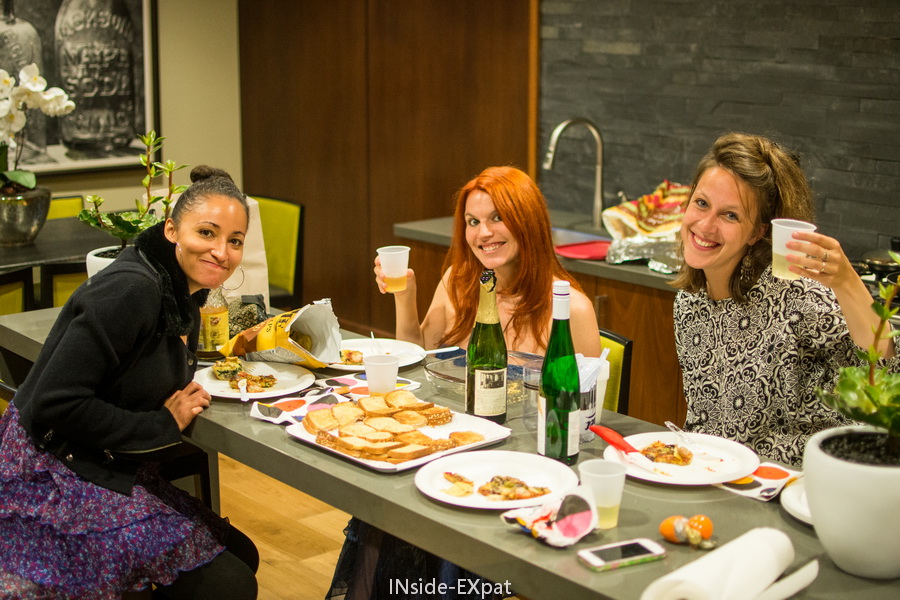 But this time, as Marjorie didn’t know the Cheesecake Factory, we decided to bring her there. But I was far from expecting that in lieu of a “First time in Cheesecake Factory” evening, the girls had organized my Baby Shower! A Baby Shower is a party organized for a pregnant woman by her family and/or friends. It can be a big one (like the one I have been hired to take pictures for, a few months ago) but also smaller. Baby Boy, who will have the French and American nationalities, had his very first party made in USA. 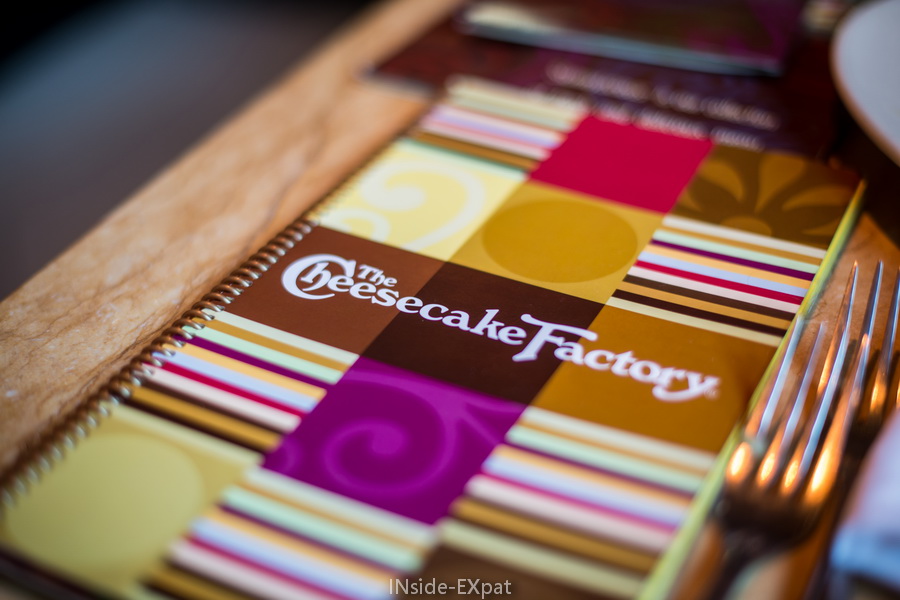 I was the last one to arrive at the restaurant (late as usual!) and I had the great surprise to be welcomed with beautiful balloons (including a big blue giraffe) and a big wrapped present. 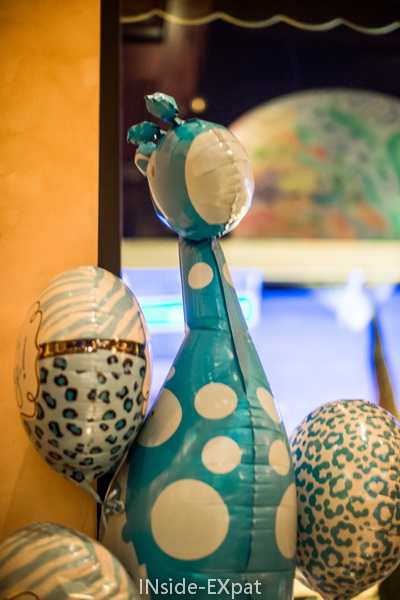 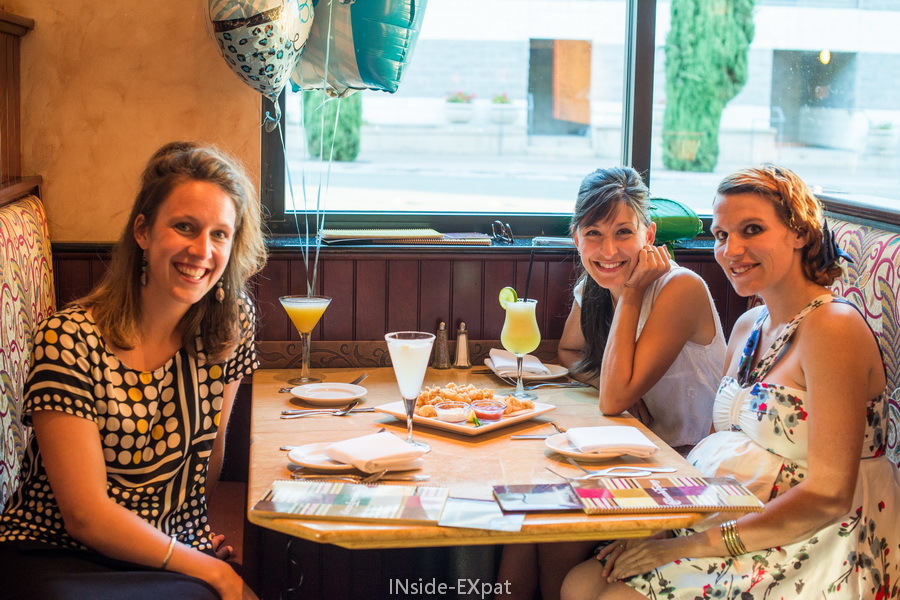 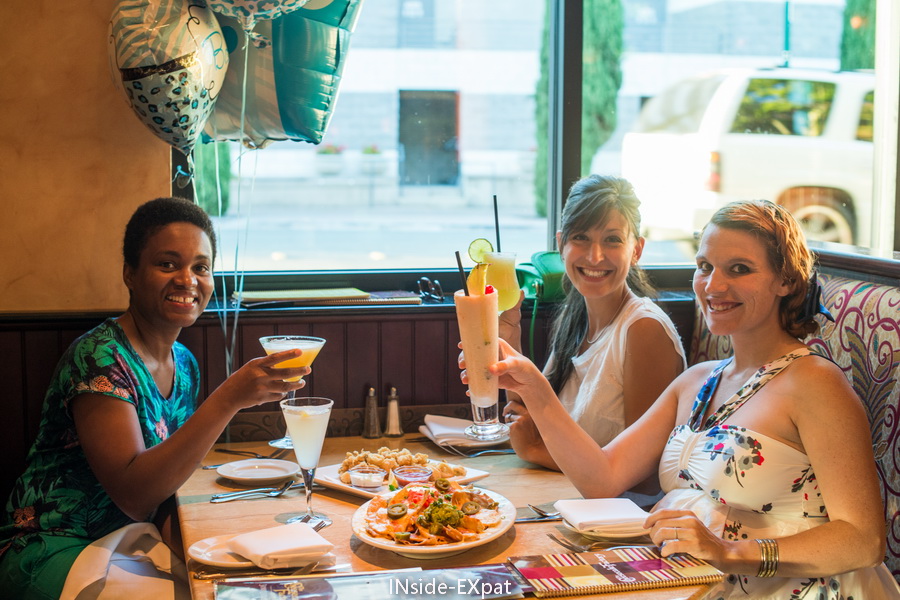 We spent a lovely night and, for sure, the waiters had the confirmation that French (and Belgian) people take their time when eating as we stayed for 3 hours and had many opportunities to listen to the Happy Birthday songs given to other customers… We were not the only one to come for a special occasion! We ordered various dishes and loved each one of them. 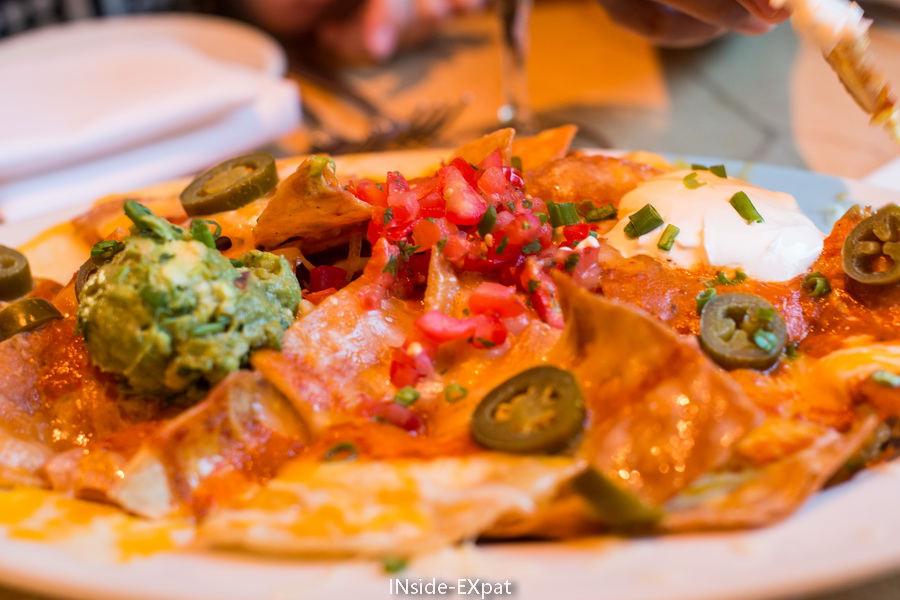 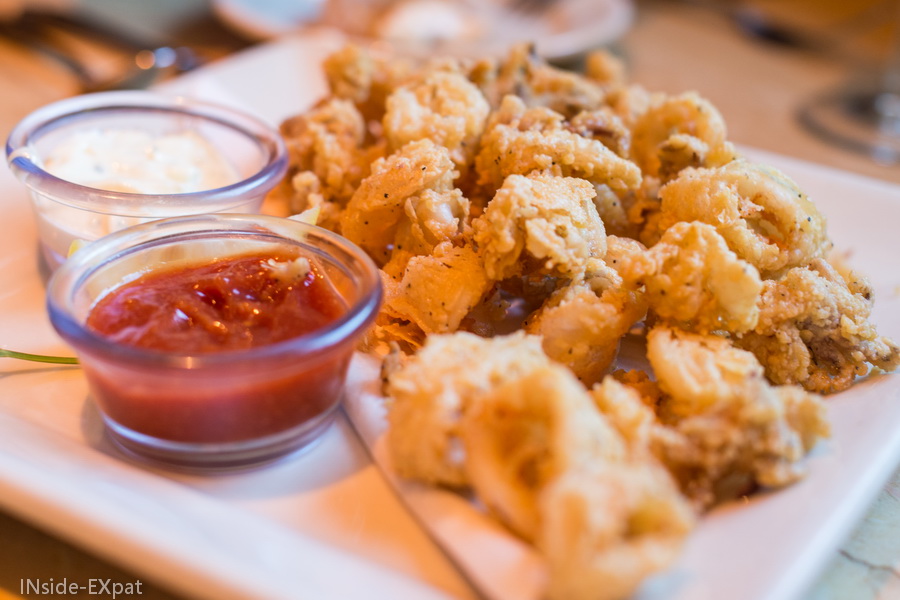 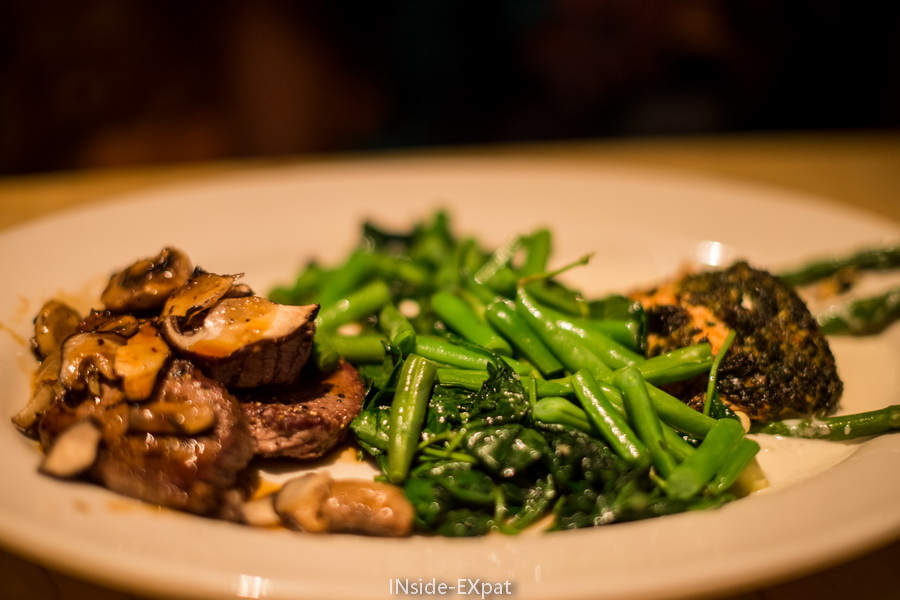 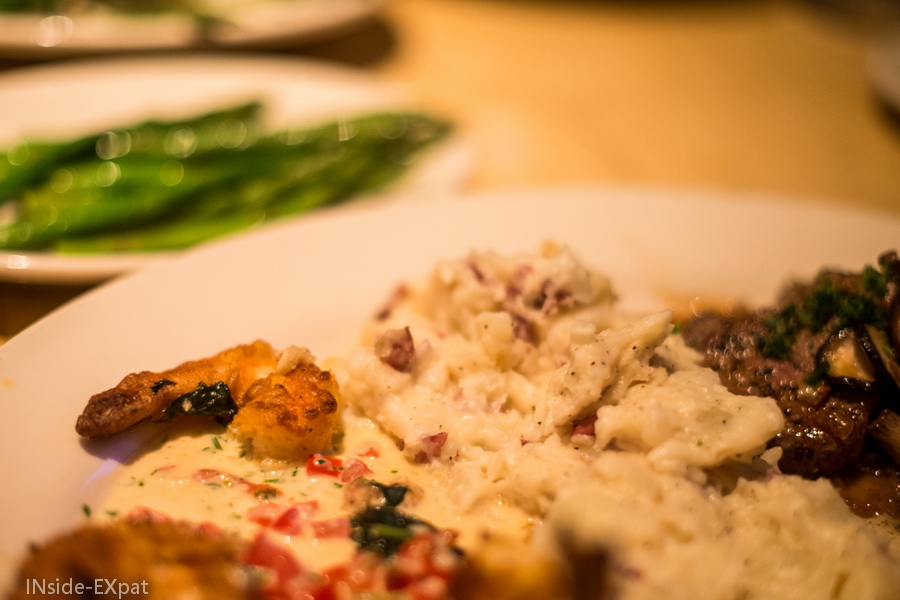 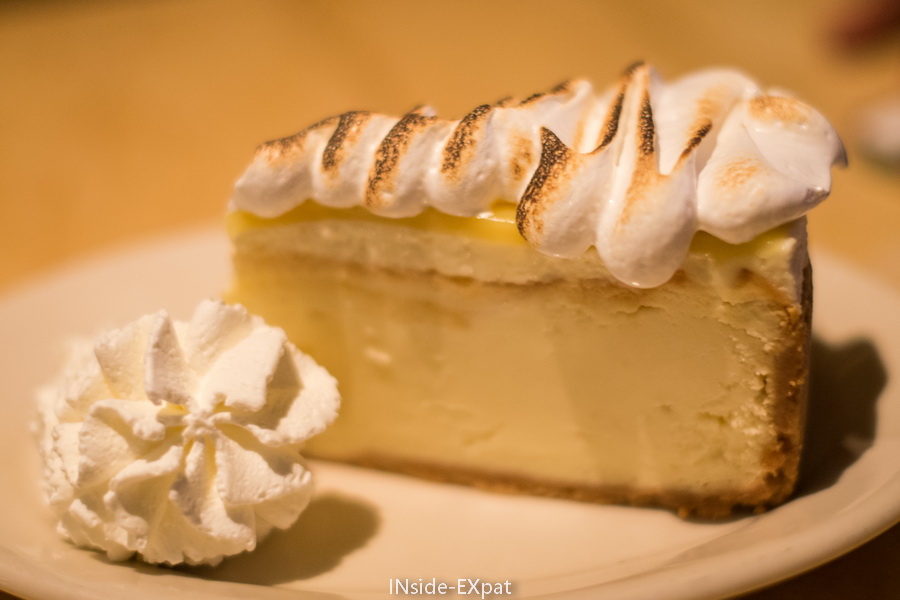 Just before the dessert, I opened my gift: a wonderful activity gym for babies. We are now looking forward to see Baby Boy enjoying it! 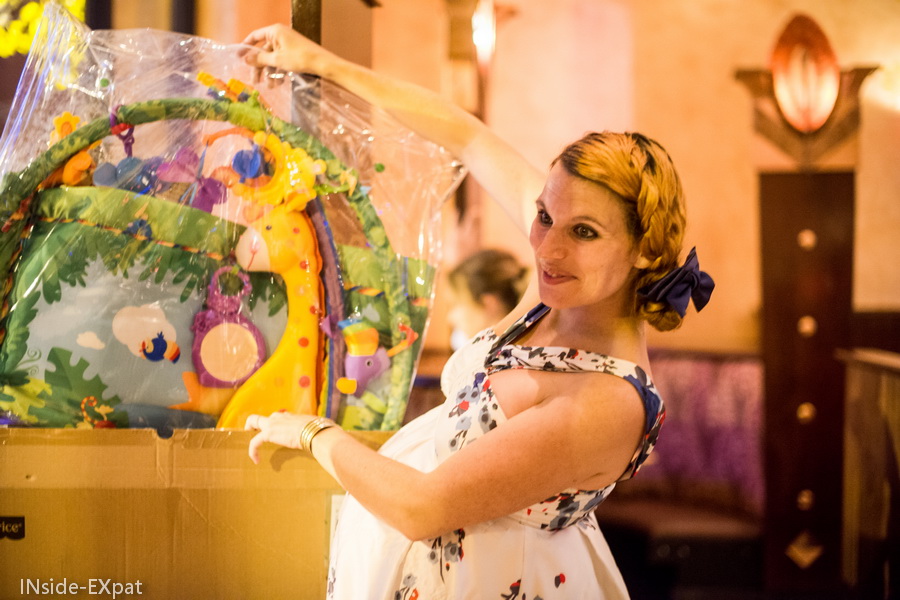 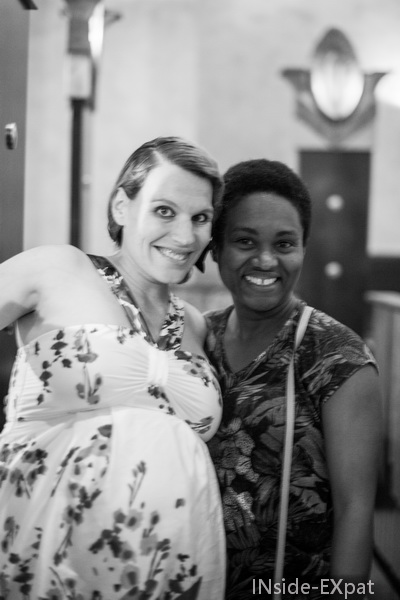 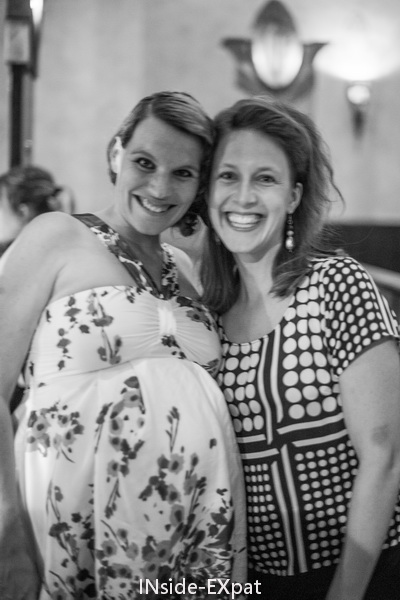 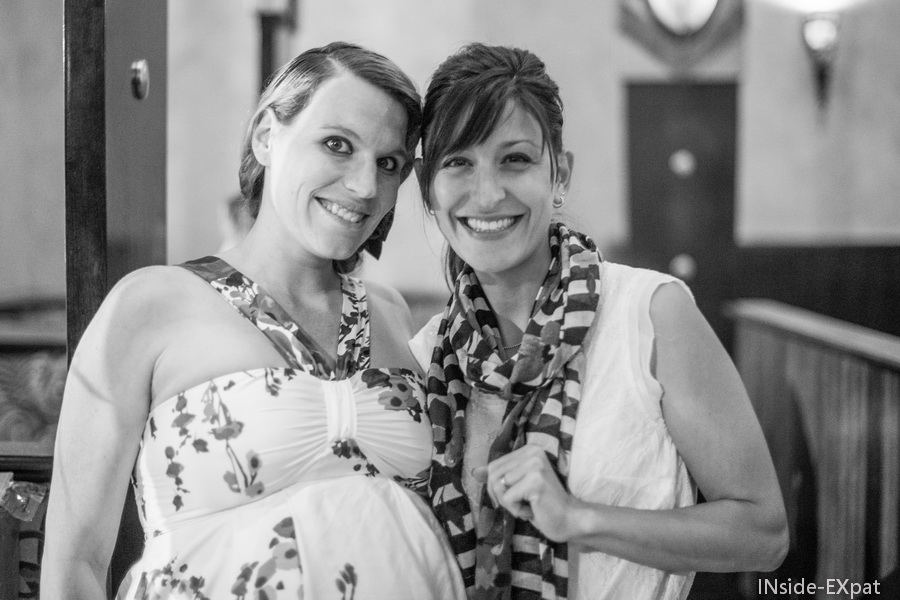 I came back home with my big balloons and Mimi was still awake waiting for me. She has been delighted to see all these balloons that she happily put in her bedroom.

A big thank you again to all of our friends in California for these nice surprises and all the moments spent together. We are happy to know that there is so much more coming!

Pic of the month : Upside Down
It's more fun in the Philippines - Day 5 : Batad, in the heart of terraced rice fields