Some of you may have noticed, this article is the first one from Daddy B. (it’s me!) on the blog.

It has been a long time since I wanted to contribute here, and even if I have many ideas, I was always finding excuses to postpone the writing. The “white page syndrome” maybe…

So, I decided to begin slowly with a “musical” post.

A good opportunity to start a new series, that I will try to feed as regularly as possible: Music to your ears. 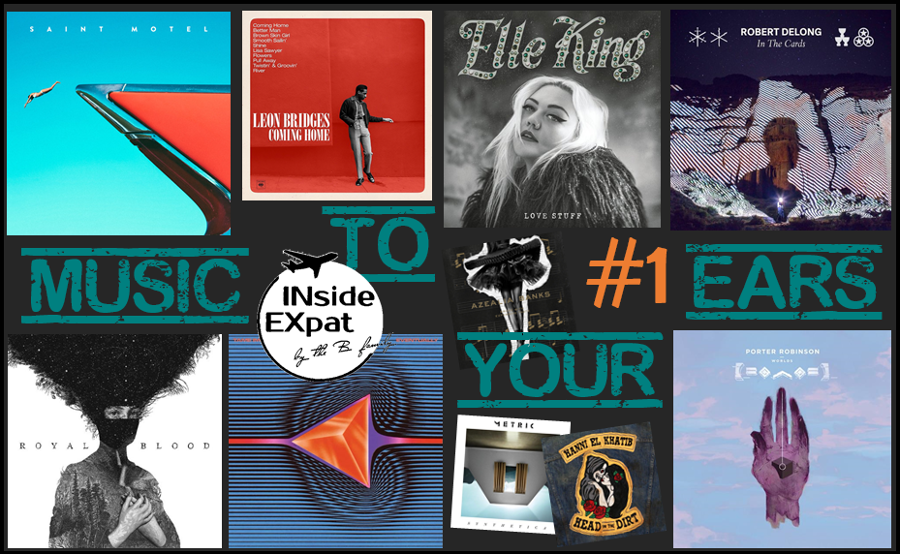 Indeed, since we’ve been expatriate, occasions to discover artists and songs not or hardly broadcast in France (where we are from) are plenty, especially here in the US (I won’t bother you with the K-pop girls bands I was inadvertently listening to in Singapore…).

So, here are my current music favorites (mostly “made in USA”). Don’t hesitate to tell me if you enjoyed some of them, or if your ears got hurt…

Birthplace of grunge music (Nirvana, Foo Fighters, Pearl Jam, Alice In Chains…), Seattle, WA, has long seen the revelation of major music artists, one of the latest being the electro-hip hop duo Macklemore & Ryan Lewis. I don’t see why it wouldn’t be the case with Robert Delong (also from this city) as all songs from his forthcoming album are meant to become hits.

I have been listening to “Don’t Wait Up” for a few weeks and I just can’t get enough. Your turn now?

Royal Blood – Out Of The Black

Royal Blood is a duo of musicians (a drummer and a singer-bassist making his bass sound like a guitar), and to me, the greatest rock band from UK since Muse. Their powerful and refined style immediately reminds us of Matt Bellamy’s band, but also other notorious predecessors such as Led Zeppelin and Rage Against The Machine. The comparison is also valid for the singer’s voice, aerial enough to balance the strong musical background.

And the video clip is worth to be seen, even if quite violent at some times (but we are talking about rock music here, right?).

Electronic music with rock influences, inspired by manga culture, and live performances completely remixed… No, I am not describing the Daft Punk, but a 23 years-old American artist, whose album is produced by Skrillex, and which could embody the rebirth of the French touch… if we could force him to be naturalized…

Here is a track to listen to entirely (and the whole album as well) to fully appreciate it.

Elle King – Under The Influence

Her voice sounds like Adele, Duffy, Amy (shall we also say Janis?), and will probably allow Elle’s firstname to be known as well. In her first (and a bit patchy) album, we find “Under The Influence” which makes me say it is not the last time we hear of her.

Take a dose of MGMT, a hint of Pink Floyd and a pinch of Air, stir well and you will get a glimpse of the psychedelic pop-rock style of Tame Impala. The Australians new album, “Currents”, has just been released and is definitely worth listening!

Formed in 2009 in Los Angeles, CA, Saint Motel is part of the great indie-rock-bands line including The Killers, Franz Ferdinand and Keane. Without recreating the genre, their songs are well constructed, melodic and catchy. In short: refreshing!

One comment (whatever it is true or not) under this Youtube video begins like this: “At Fort Worth, Texas, it is said that when he sung for the first time in church, more than one fainted to the belief of witnessing the resurrection of Sam Cooke or Al Green.” (also works with Otis Redding). This being said, here is a bit of Soul music!

And to conclude, here are some older tracks which I can’t help but listen. I hope you will enjoy discovering or rediscovering them!

Despite very high expectations, his first album is quite disappointing to me, but the title “212” remains a hip house hymn that makes you want to install a dance floor in your living room!

The Canadians of Metric have continuously made their rock music evolve to get to a style of their own, that I have not found elsewhere yet.

This native of San Francisco, CA , worked in 2013 with The Black Keys’ Dan Auerbach and delivered an album heavily influenced by this collaboration, mixing punk-rock and blues.

I hope that both you and your ears have enjoyed this new section! I will be back here soon for new posts “by B. Daddy.”. Meanwhile, I hand the blog back to Mummy B. who will continue to make you travel, with the eyes this time!