Last year Daddy B. had to go to Manila for a business trip, so Mimi B. and I took this opportunity to fly with him to the Philippines. Friday that week was the last day we had to spent without him as we had planned a great and long weekend of vacation in the area together.

We enjoyed our last night at the Bayleaf Hotel because we knew the night after would be less comfortable… Indeed we would spend the night in a bus heading to the rice terraced fields of the Ifugao region.

We woke up early after having spent the previous evening in Makati (an area of Manila where you can find many buildings and malls) and went to the breakfast buffet room.

One of the things we really enjoy when we stay in nice hotels is the breakfast buffet! And it was exactly what we expected to be at the Bayleaf: fruits, cereals, all sort of cheese, omelet or scrambled eggs on order and a lot of different cold and hot dishes (we just couldn’t try everything!). 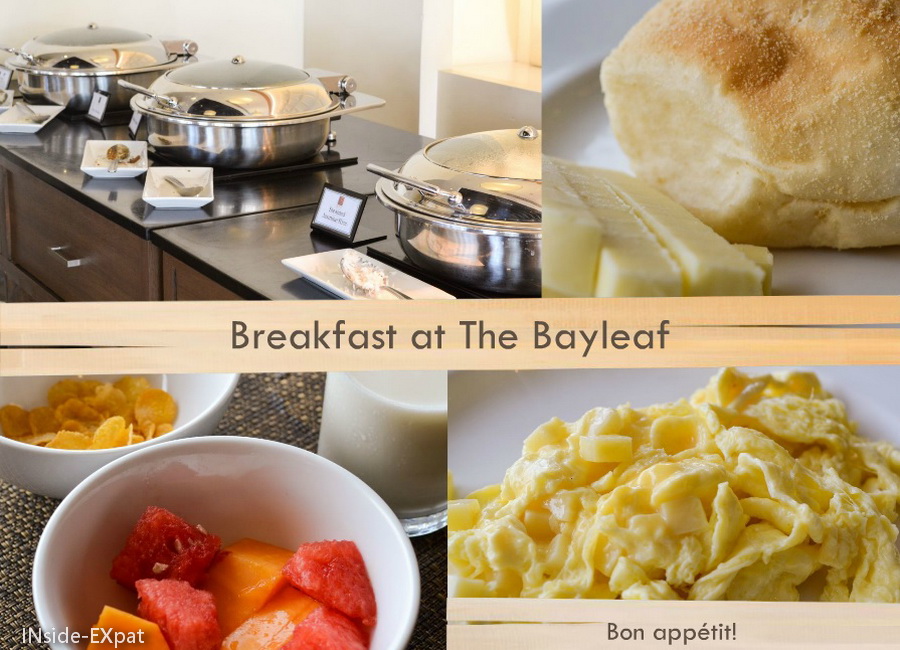 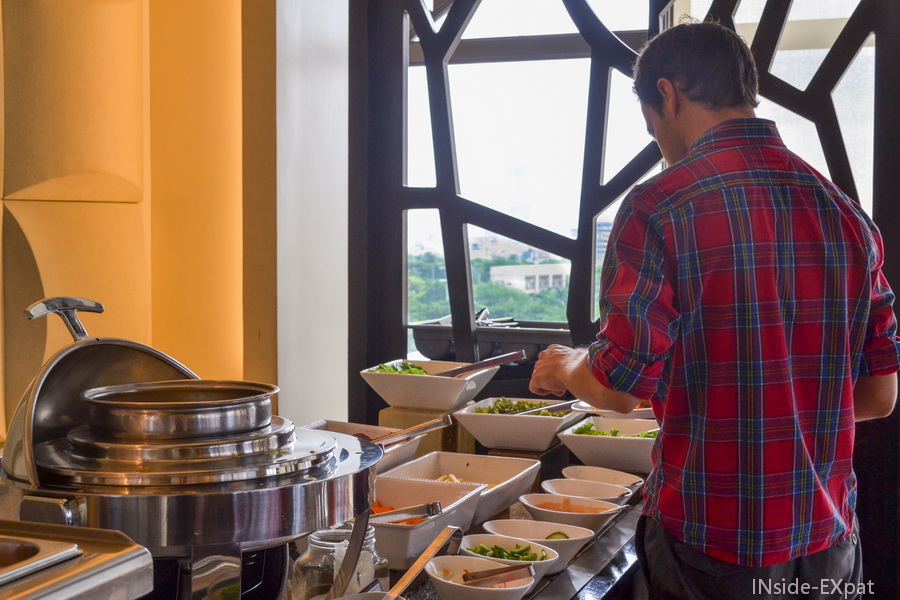 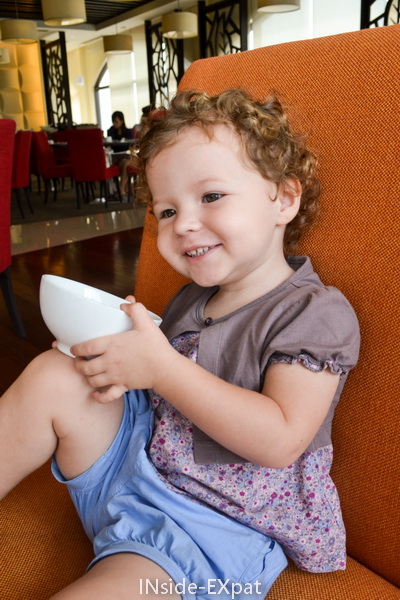 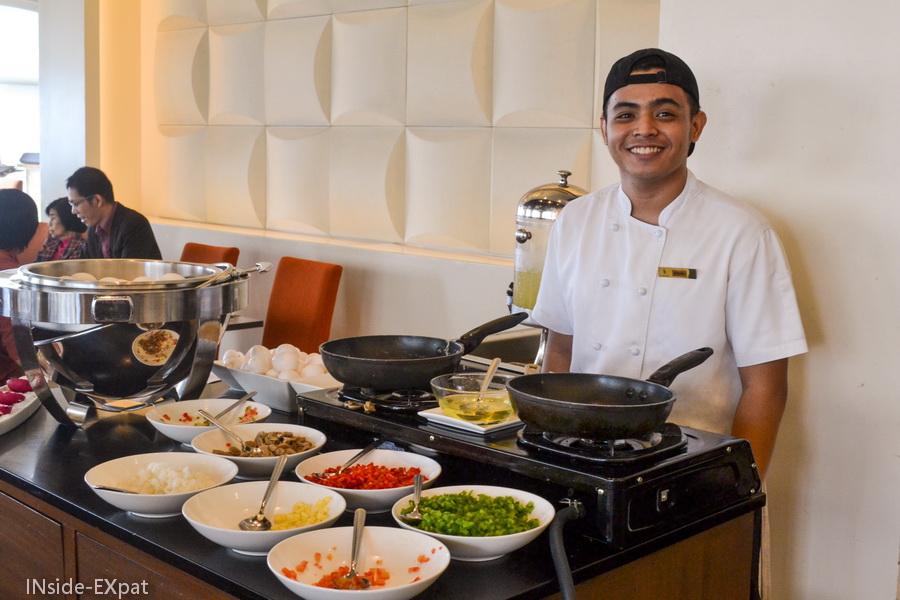 The 9 Spoons, where breakfast is served, is a pleasant place with a great view of Manila, just like the hotel restaurant where we had dinner several times, the Sky Deck View Bar. 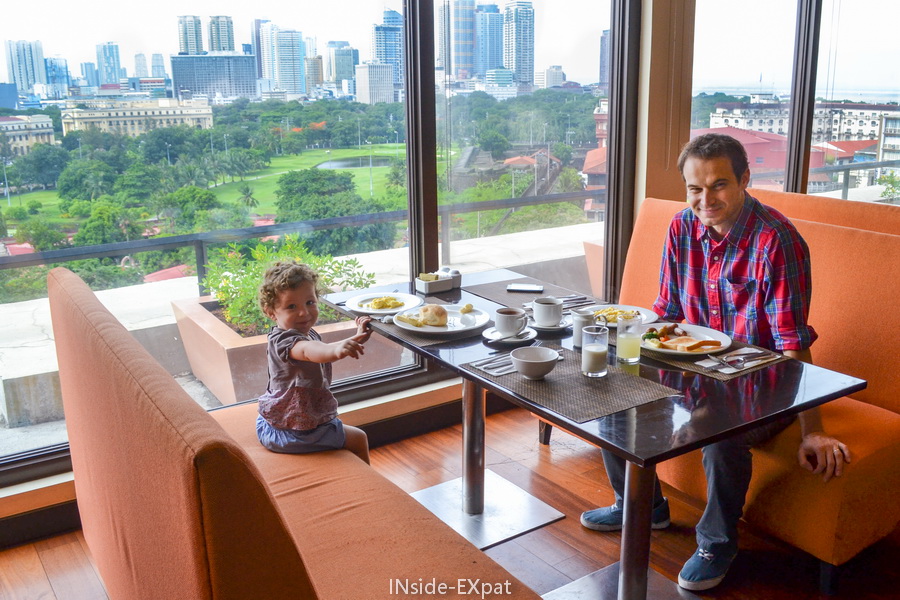 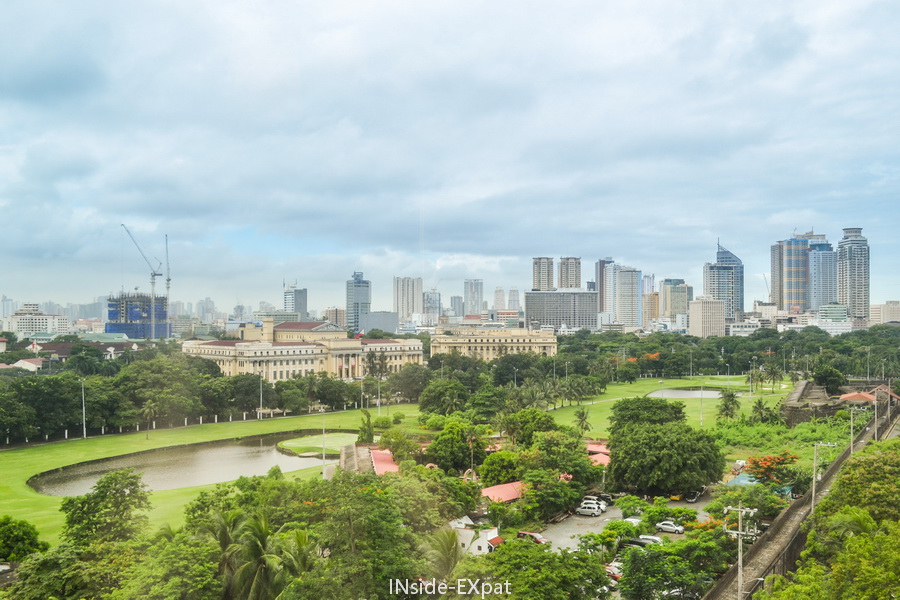 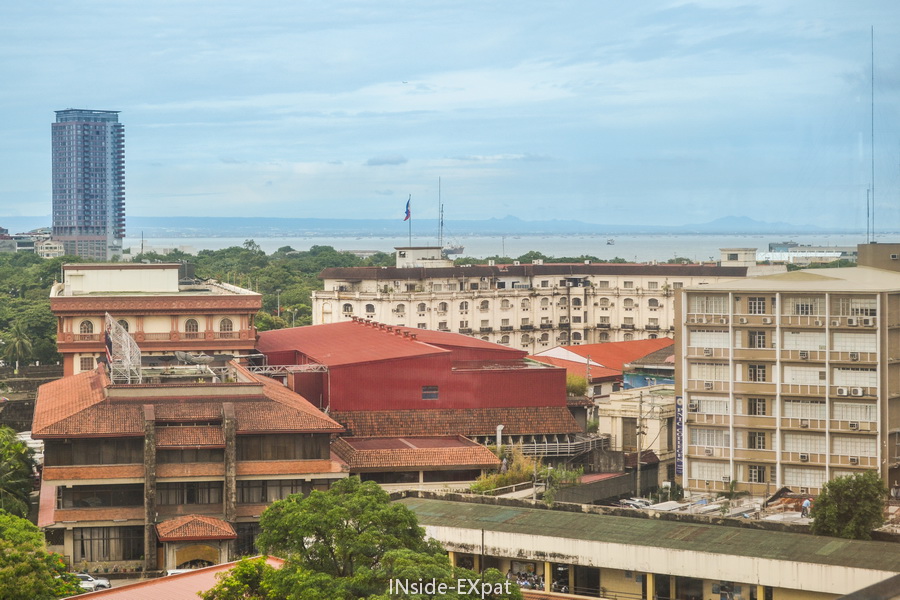 Once Daddy B. left for work, I had to pack our bags, leave the room and proceed to check-out. The staff nicely offered me to keep our bags for the day so that Mimi B. and I could have a walk in the area.

So we went back to Intramuros, the historic district we already visited a few days before and enjoyed one last time its particular atmosphere. 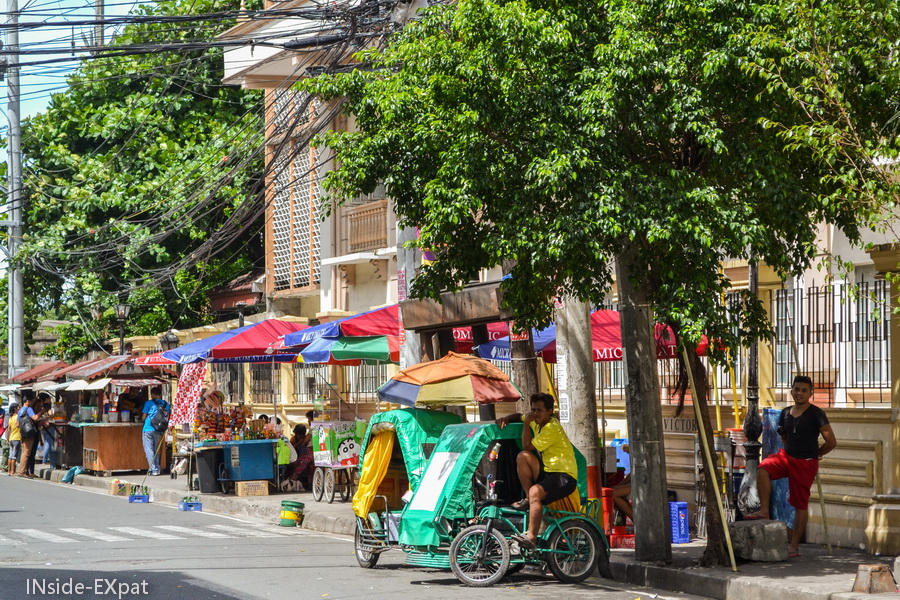 For lunch, we ate once again at the canteen we discovered a few days ago. The staff recognized us and we were warmly welcomed. We enjoyed chicken with sweet potatoes and rice and paid only 150 PHP (beer, water and tip included, around $3.30). 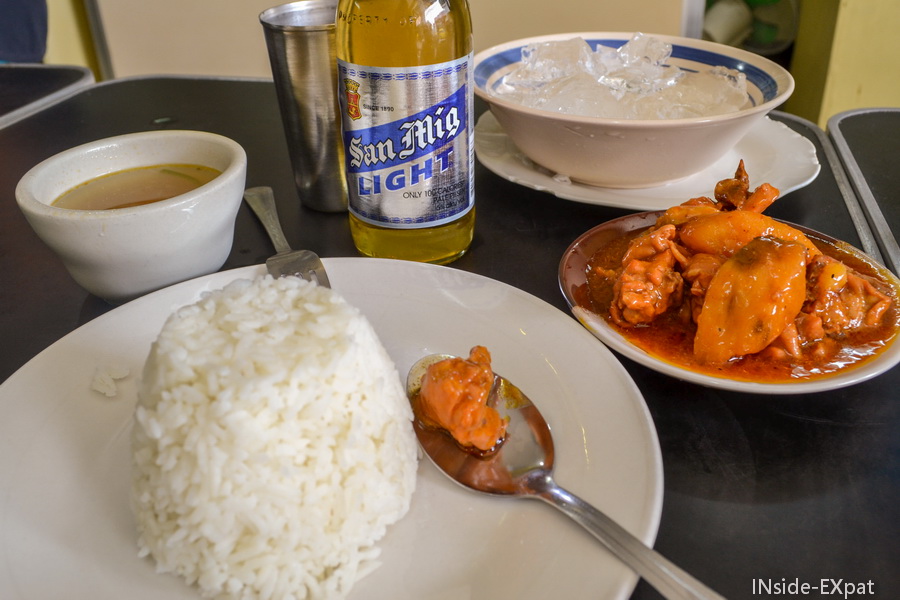 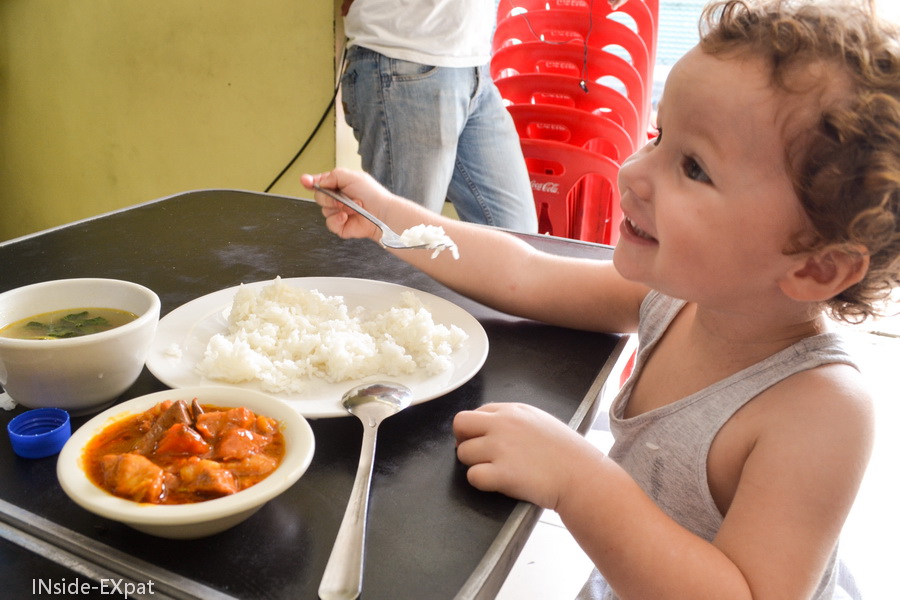 Before leaving, some of the employees asked for a pic with Mimi B. As often in Asia, caucasian kids represent an unusual beauty and especially Mimi B. with her curls and blue-green eyes. So she received many compliments (well… in fact in the United States she does too… people often call her Shirley Temple!). 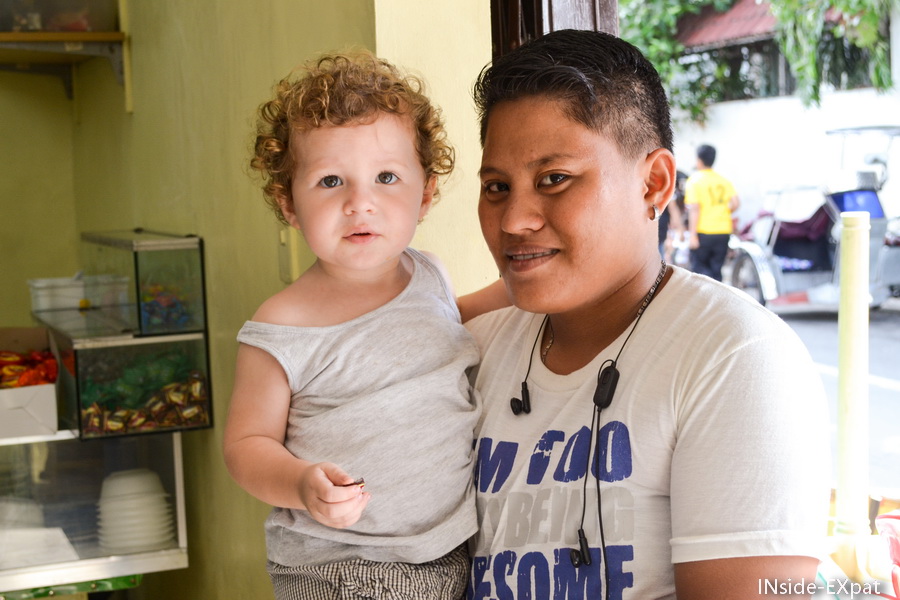 Then we hopped in a tuk tuk to get out of Intramuros, driving through a guard station and heading to Rizal Park (also known as Luneta National Park). I was willing to keep the program of the day very light, as I knew that the next few days were about to be quite exhausting… and you will see in the next posts that I was right! 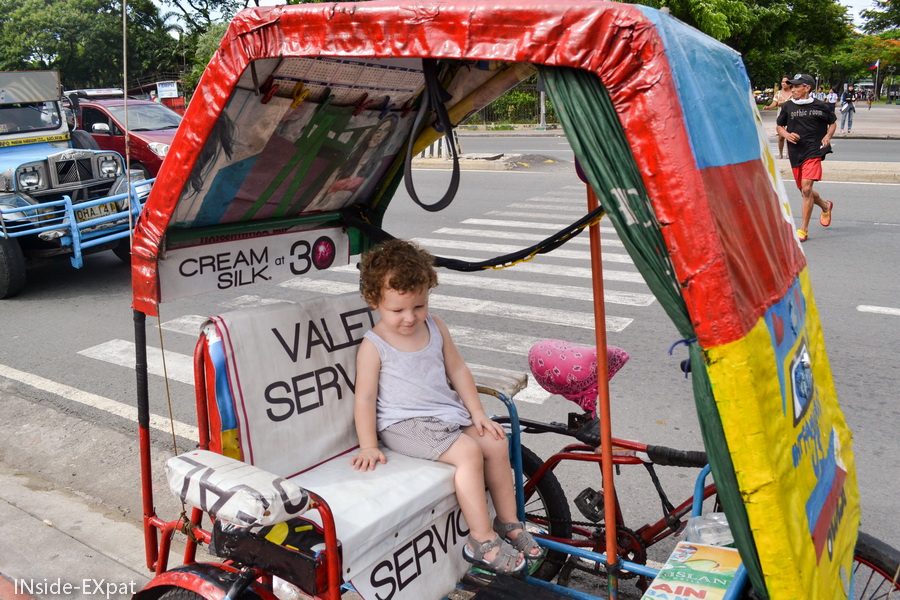 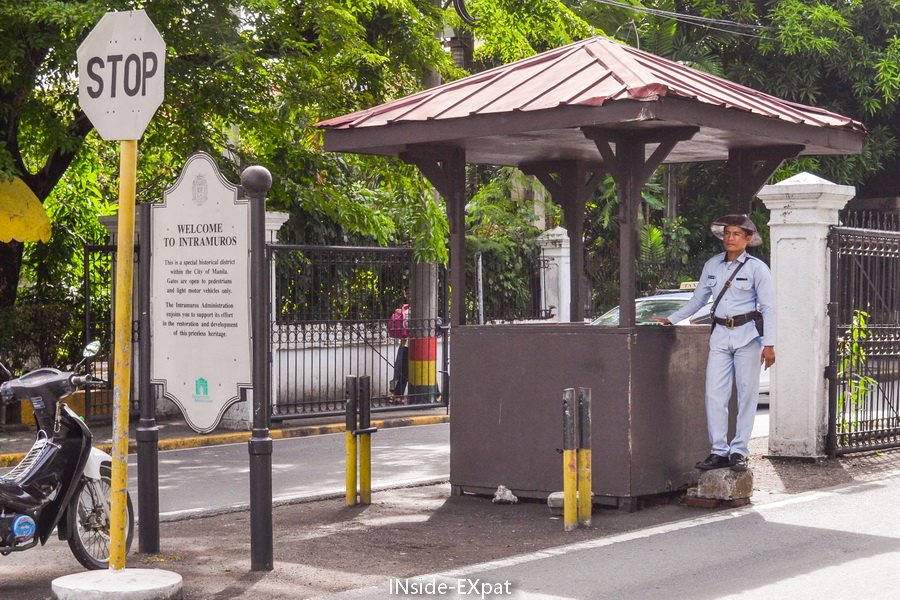 The park is very important because a lot of major historic events were held there like the execution of José Rizal in 1896. Actually, the park has been named after this national hero. I already wrote about him in my article regarding the Bagumbayan Light and Sound Museum. This doctor and novelist had been sentenced to death because he was considered as a revolutionary during the Spanish colonial period. The Rizal Monument was built in the park to honor him. 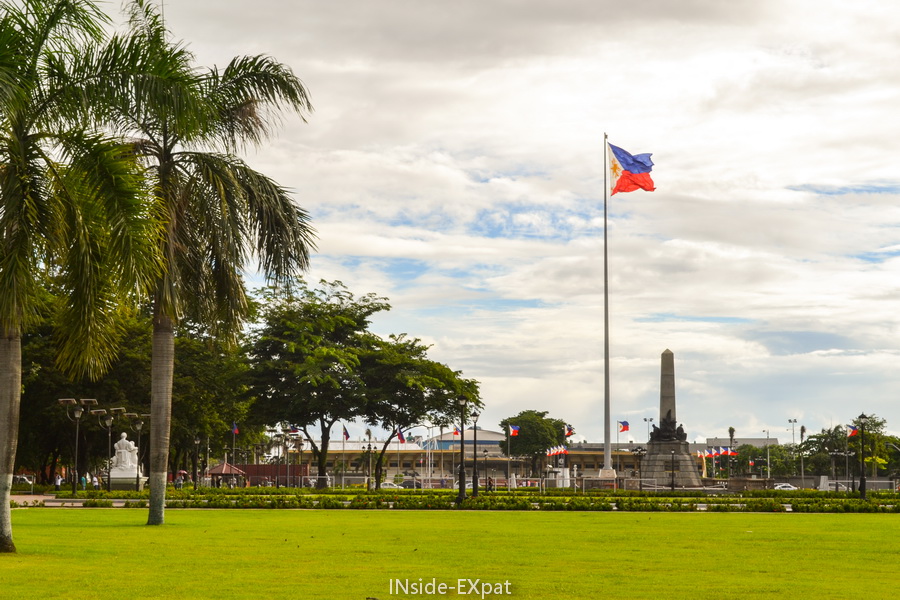 Rizal Park is also the place where the Independence of the Philippines has been declared by the United States, fifty years after Rizal’s execution. Some places like that one are emblematic because the most tragic and the happiest events happened there.

The park is really a beautiful place for having a walk. Lush lawn, water fontains show, music and flags of the Philippines, it is very nice and colorful, and Mimi loved it. Of course her favorites were the water fountains, “dancing” with the  music. She also spent a lot of time picking the leaves on the ground (that was one of her favorite activities at that time… now she prefers wooden sticks!). 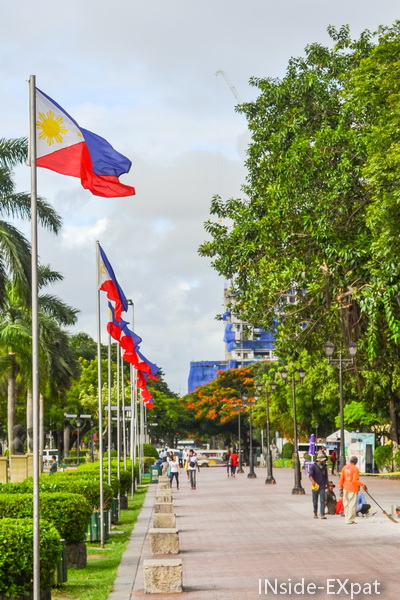 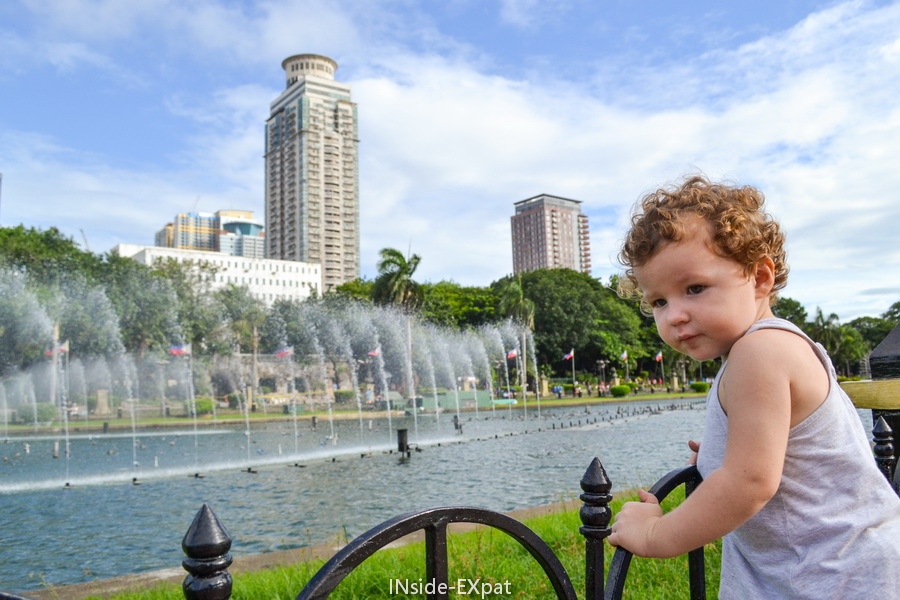 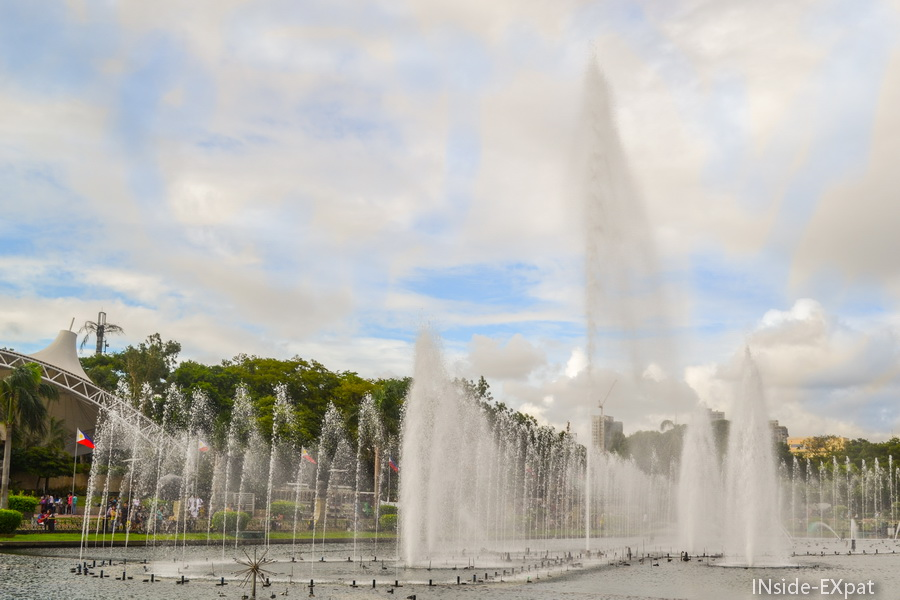 While walking, we found a shadowed place full of chess players. I was observing them when one of the man offered me to play. I finally lost two games against Dagoul who was not very talkative but tried to show me my mistakes. Maybe with more time in Manila, I could have been better!

In the meantime, Mimi was very quiet looking at the game and smiling at all the other players. They found her adorable and did not seem to be used to see an European mother alone with her daughter in this city. 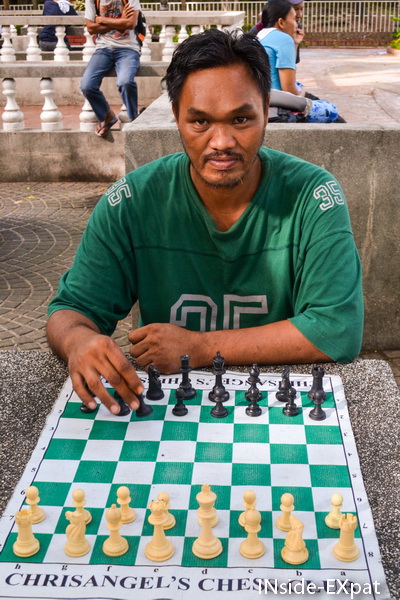 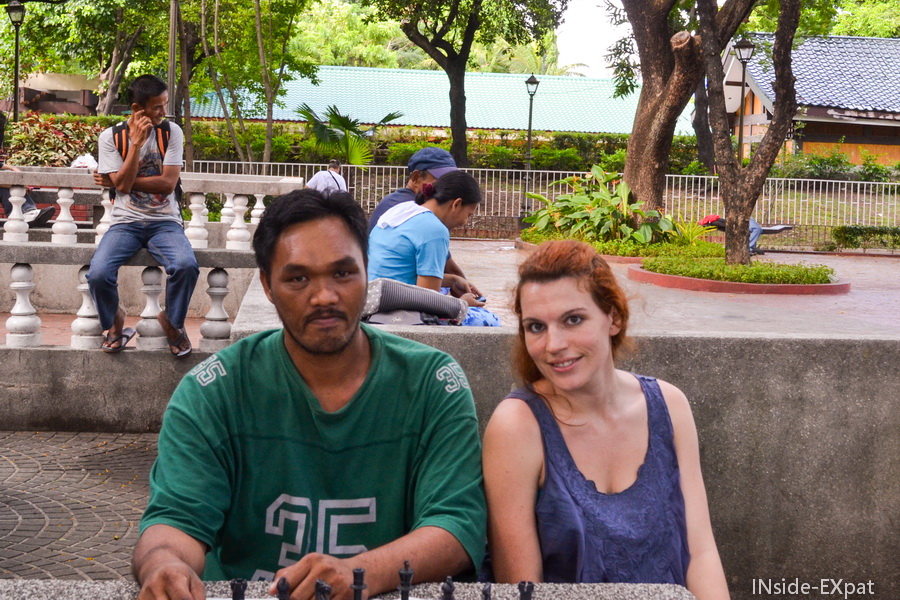 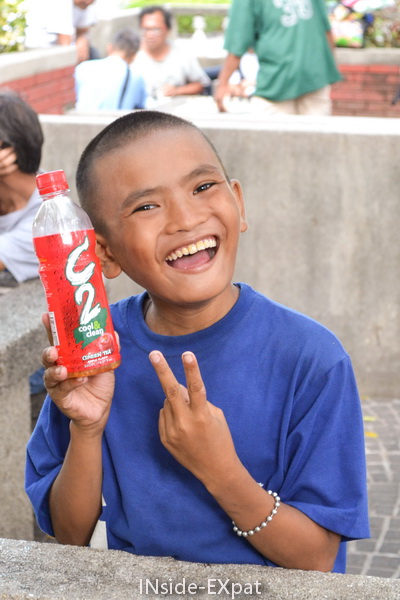 A small train was going around the park. I was sure it would please Mimi B. so we decided to wait for the next round, but we learned from the staff of the park that the train frequency was not very regular.

Since I didn’t want to run after it, we just stayed with nice Filipinos who immediately sympathized with Mimi and me. The wait seemed much shorter, with Mimi playing and laughing, and me talking with them about their city which I loved discovering so much. 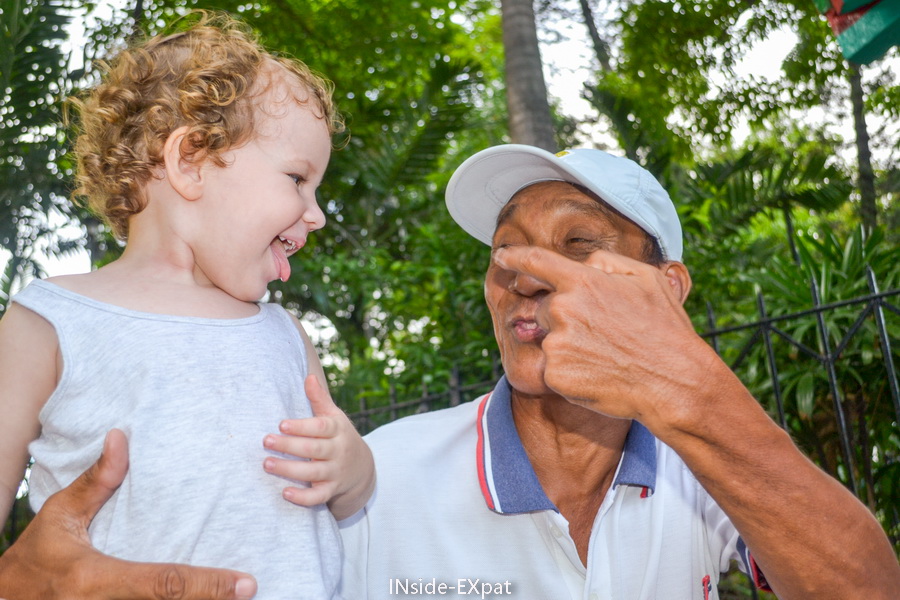 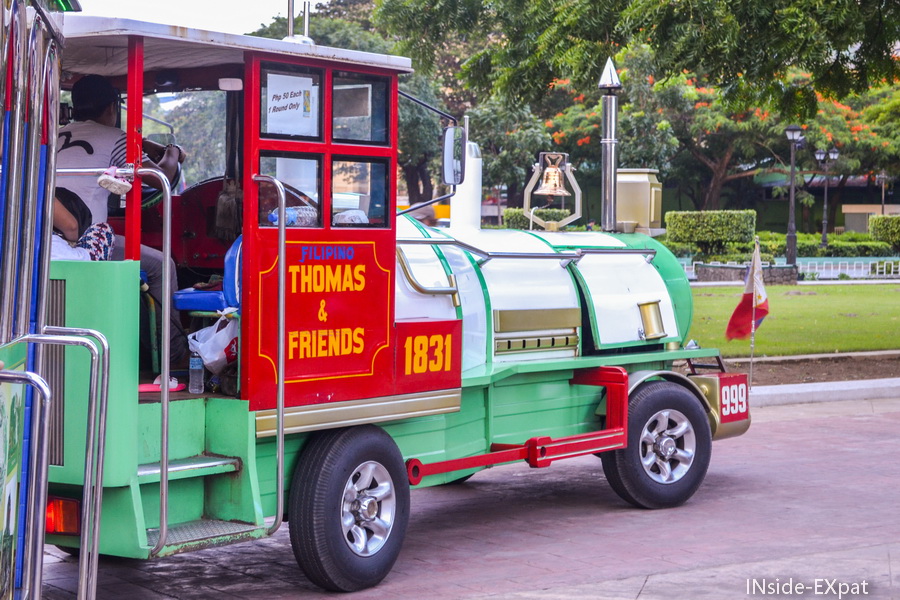 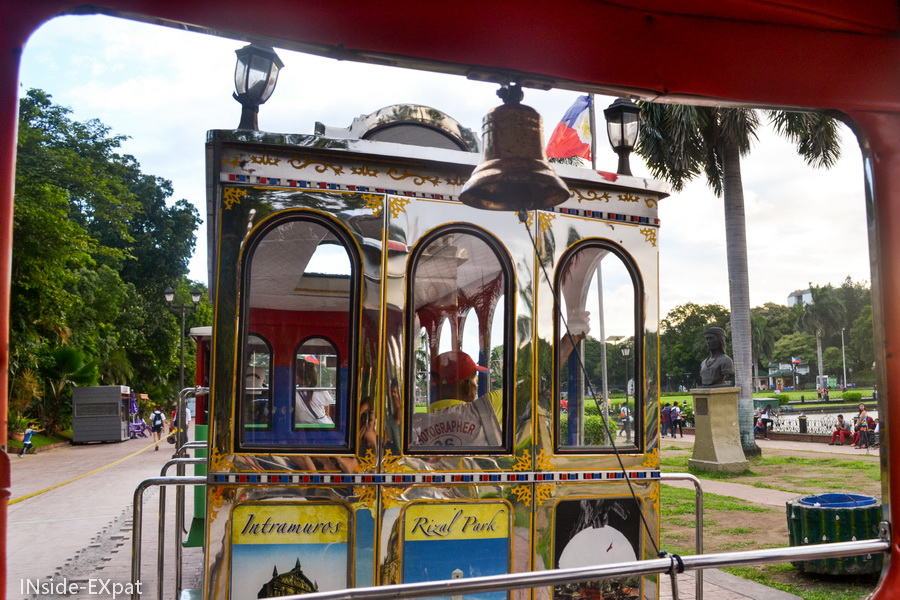 The end of the day arrived fast. We had just enough time to get our bags back at the hotel, take a taxi and join Daddy B. at Sampaloc bus station. Indeed we had tickets to Banaue. But before hitting the road for the whole night, we had dinner in a family canteen (which was basically just a few tables on the sidewalk) surrounded by a lot of kids very interested in Mimi B. 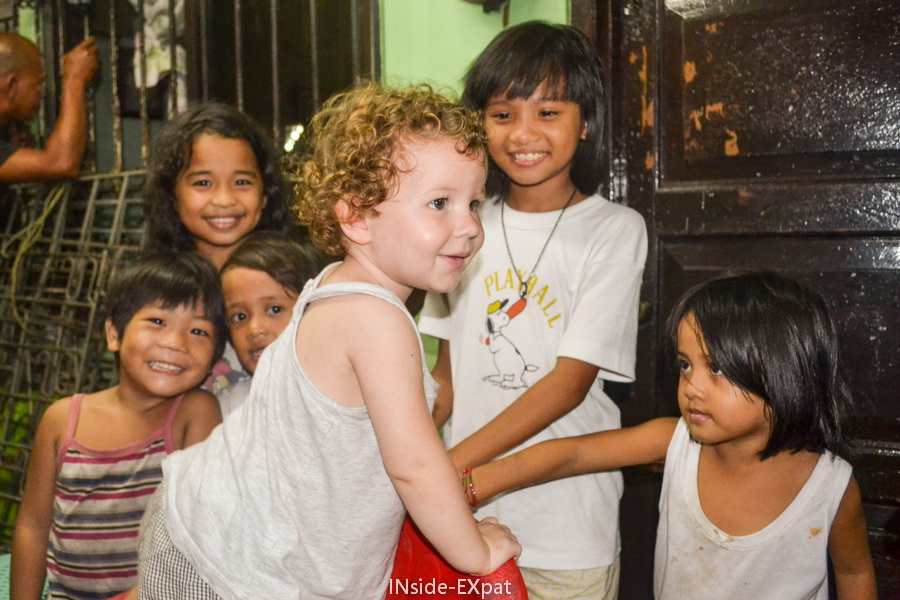 What I will remember of Manila is its varied architecture, the beautiful parks and the strong historical past. But above all, my best memories will be all these random encounters during our walks. I met poor people with difficult living conditions, but always in a good mood and with a flawless sense of positivism. Friendly children and adults laughing and always ready to start a conversation. I thought those days would be quite lonely, just me and my daughter… but instead they have been full of unexpected encounters with all these people.