I left you at the end of our first day in the Philippines after visiting Intramuros, the historic district of Manila.

For this second day, Daddy B. once again had to work. So we chosed a lighter program than the day before and totally dedicated to Mimi. So we ordered a taxi to drive to Ocean Park. The cost from our hotel, The Bayleaf, was 70 PHP (100 PHP with tip, about $2,24). 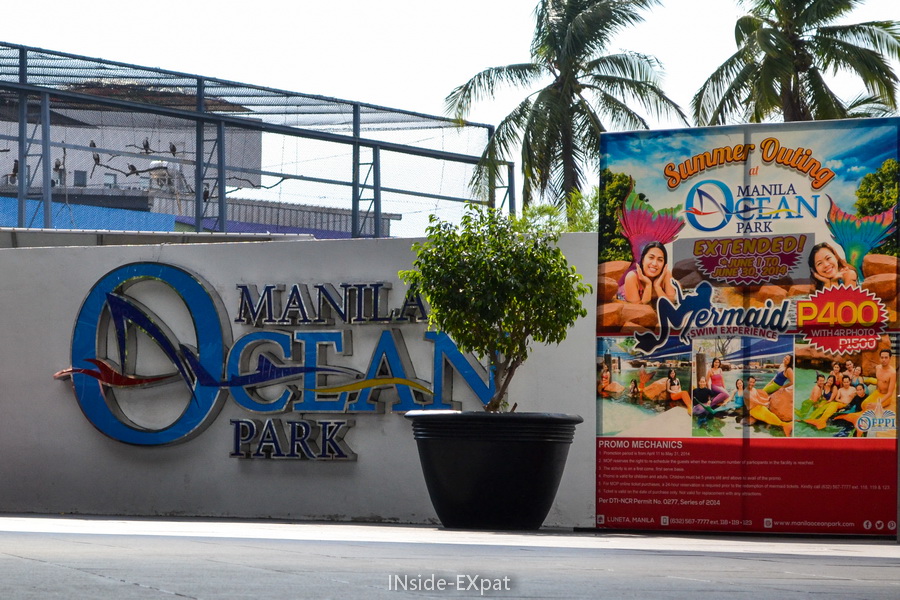 I prefer to tell it right away, if our little one (just two years old at that time) liked this place, it was very different for me as I found it not well-maintained and very limited for the comfort of animals.

Many different tickets are available and presented in combo. This gives you the impression that you will see a lot of things. But in the end, with our formula (Ocean’s Trio Madness), the two other activities added to the Oceanarium (Trails to Antarctica and Jellies Exhibit) were very short and not really impressive. Our entrance fees were $ 600 PHP each (or $13.44), Mimi also had to pay (which is not very often the case in this kind of place where kids under 4 or 5 years old are free). A quite high price, especially in regard of the actual offer.

Arrived in the late morning, we had lunch : a plate of spaghetti carbonara for each of us (well, mostly pasta as the carbonara sauce was in very small quantities). For these two courses and a bottle of water, it costed 220 PHP (or $4.90). 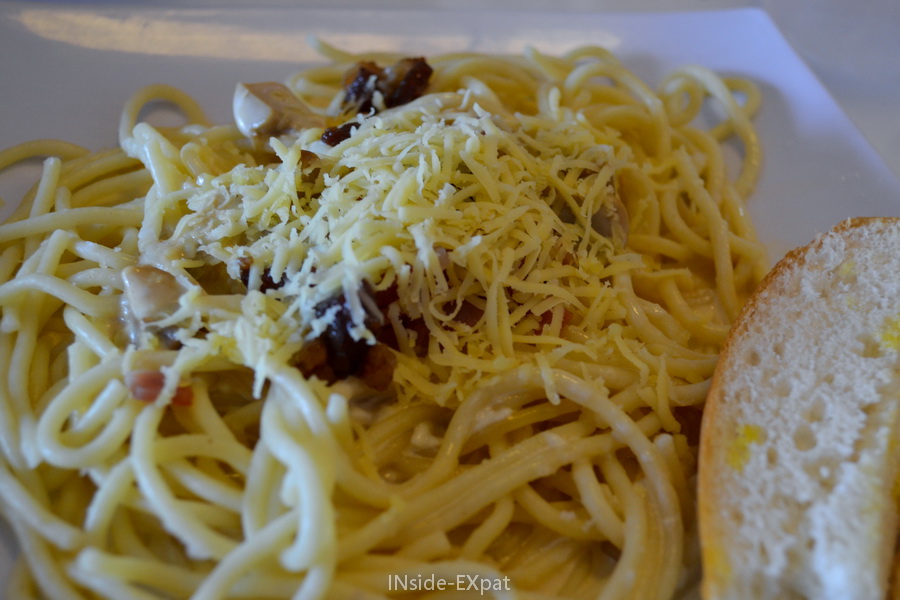 Many marine creatures are presented in different rooms, some of them are outdoors. At first glance, a lot of aquariums are low enough to allow children to see everything which is rather well thought, but the conditions of exposure for some animals may raise questions about their well-being: a crocodile in a very small space, a monkey in a tiny cage … Besides the aquarium windows were of poor quality (many hues and stripes on it) and paint of the walls was rather decrepit. 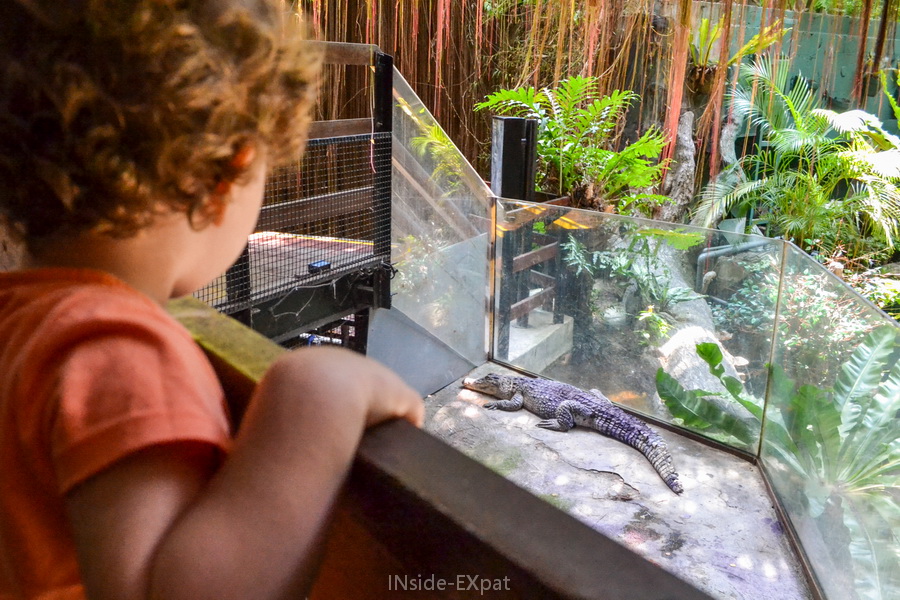 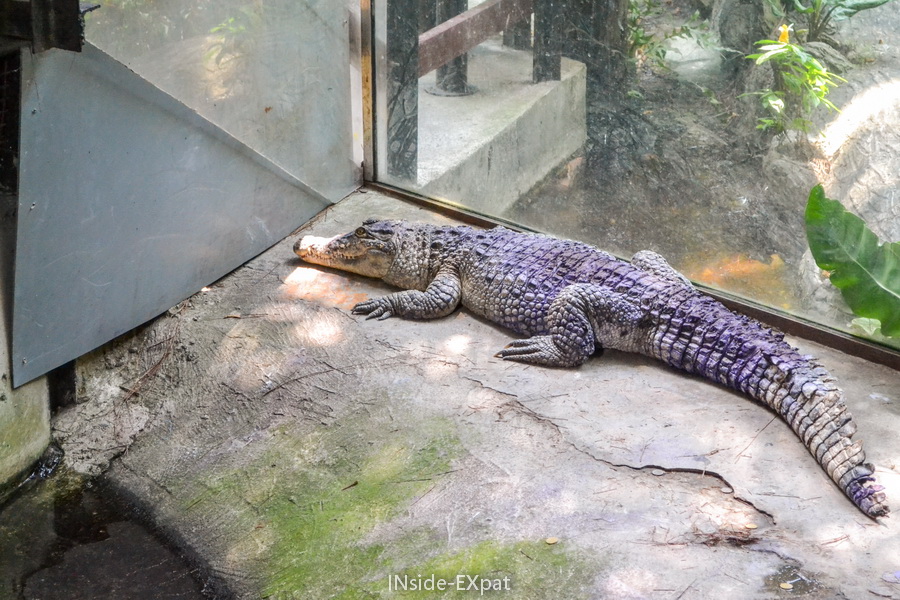 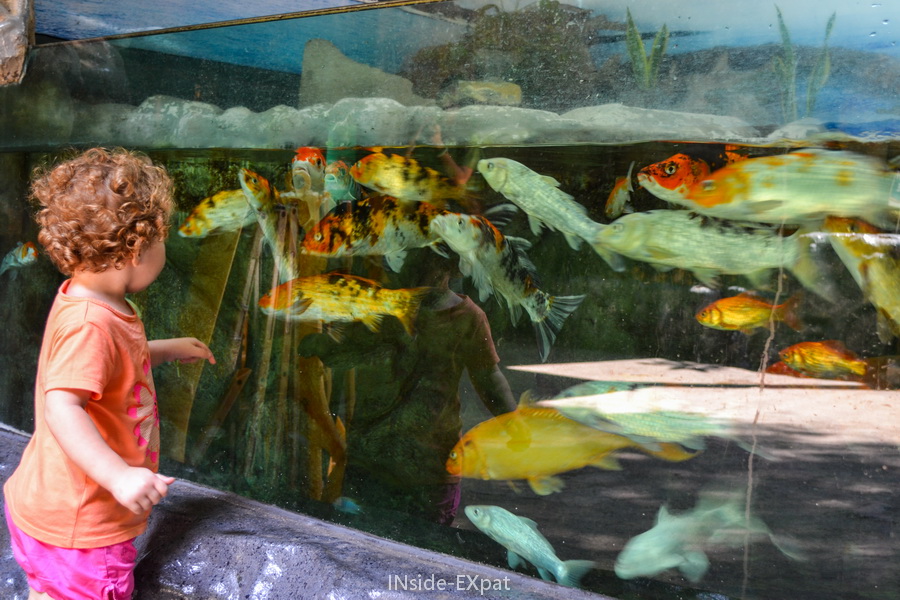 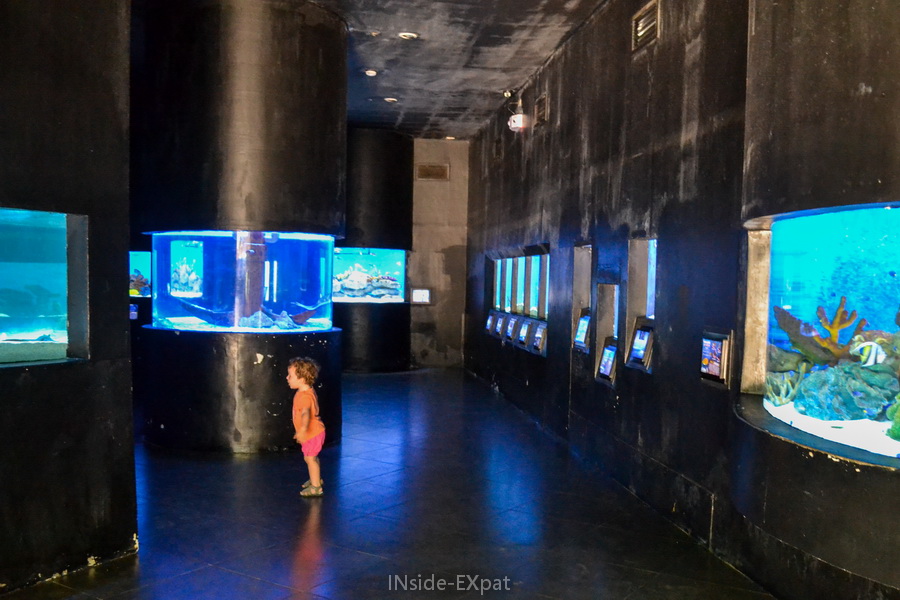 But Mimi, who isn’t aware of that, spend a good time watching all kinds of fishes and other inhabitants of the sea. Decoration efforts are done in some aquariums to enhance the visit like a false submarine wreck for example. 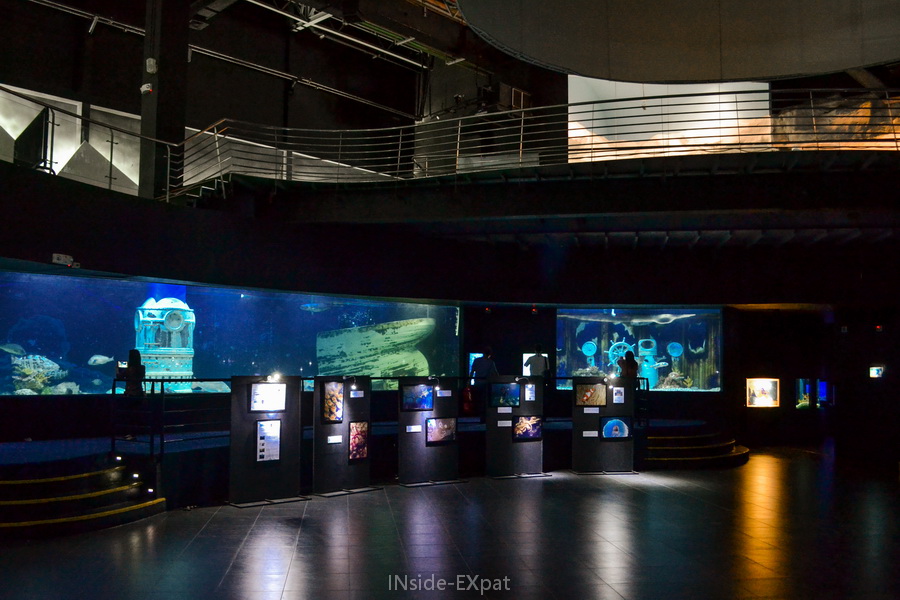 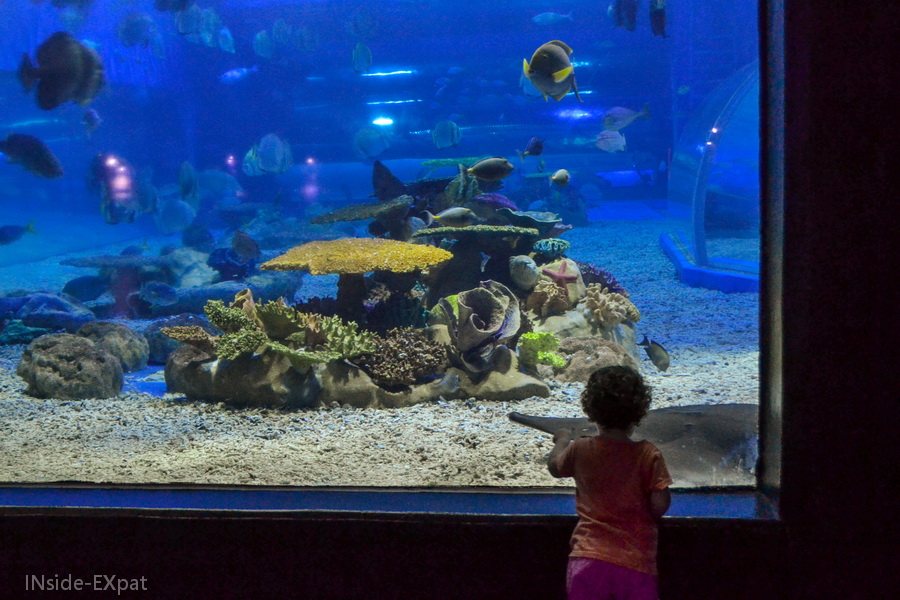 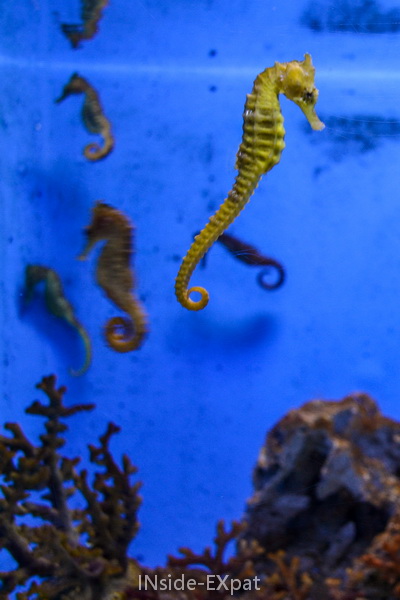 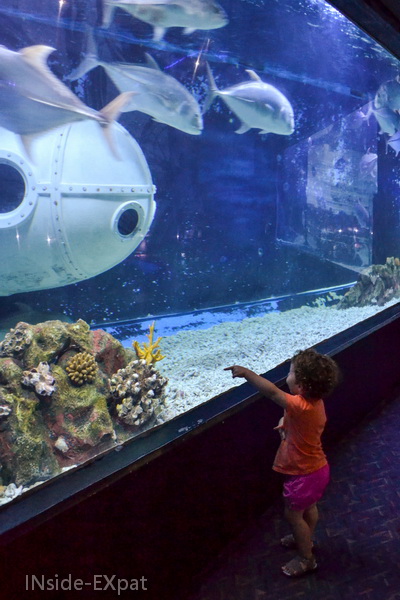 Mimi B. enjoyed the tunnel. Unlike other aquariums we visited (such as Aquarium of the Bay in San Francisco), there was no treadmill. It was not very important. But I was disappointed by the species presented at this site. For the most part we had already seen in the previous rooms. No “special guests” species highlighted here. 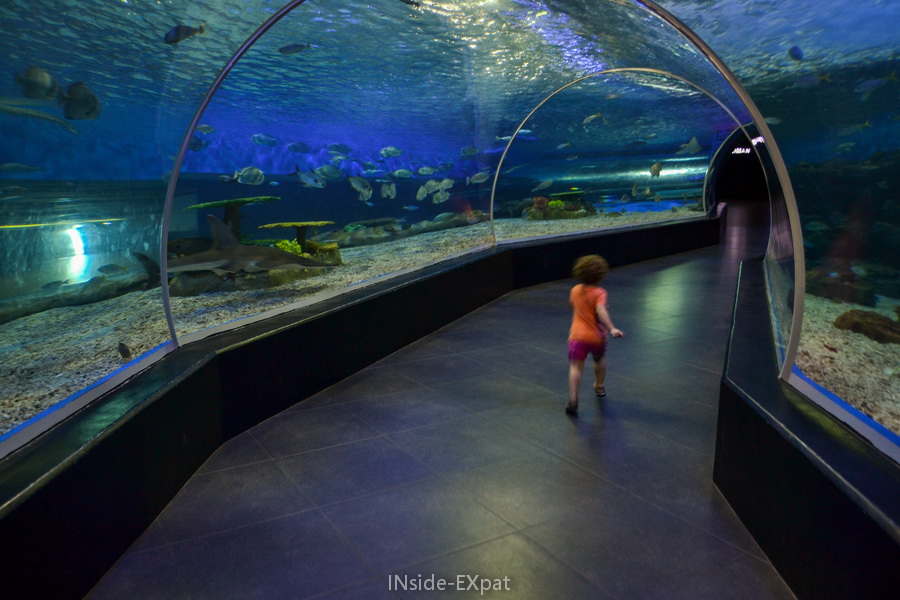 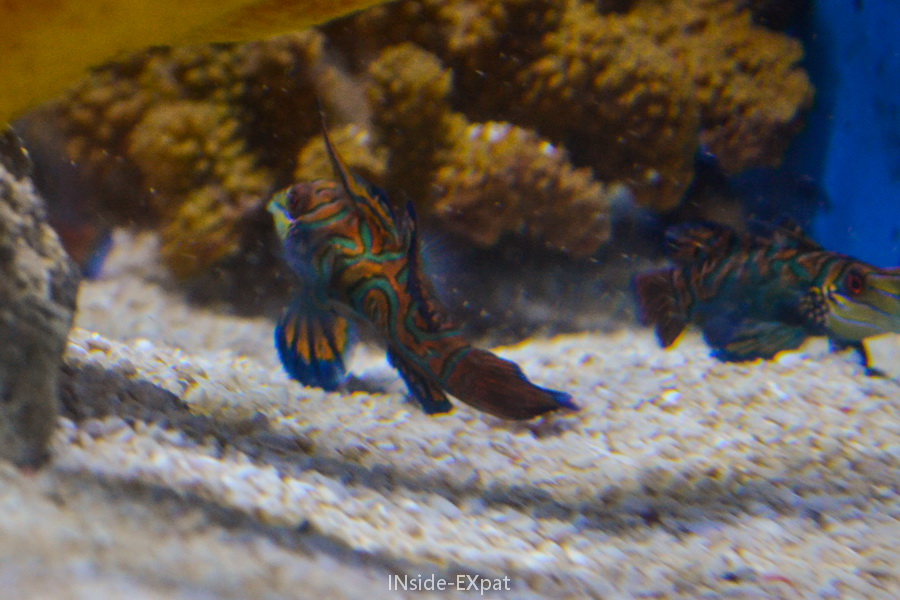 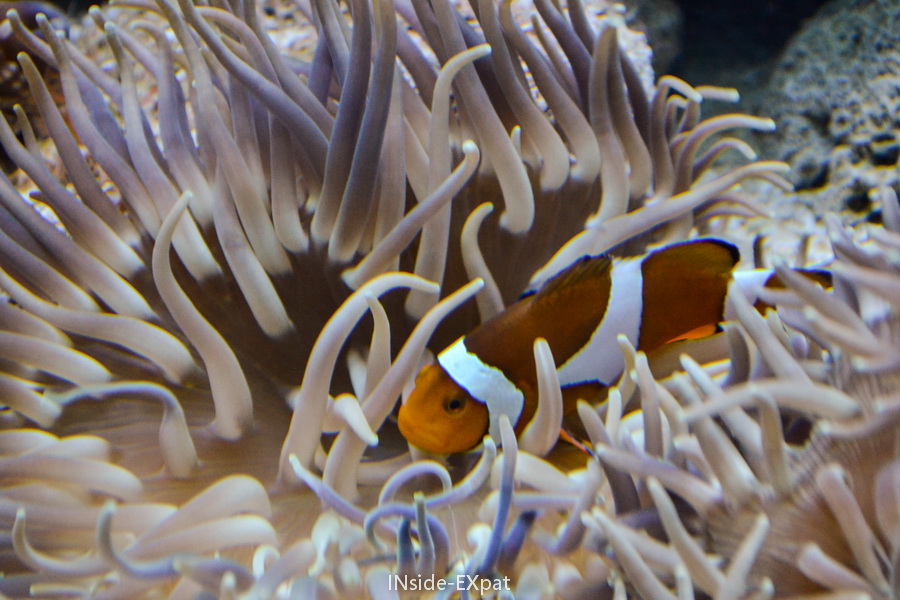 After the tunnel, Mimi stops at the children area for coloring a seahorse. A real good idea! She can relax and then we can go back to the tour. 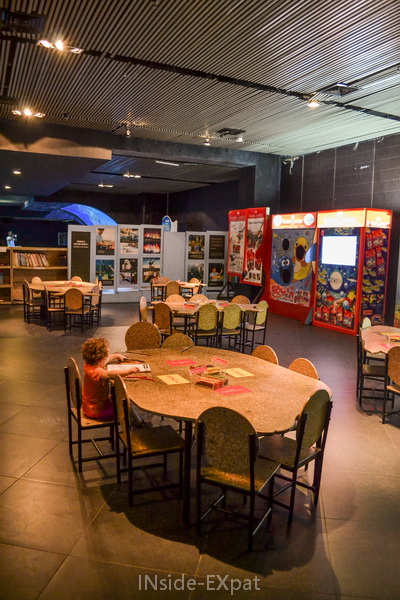 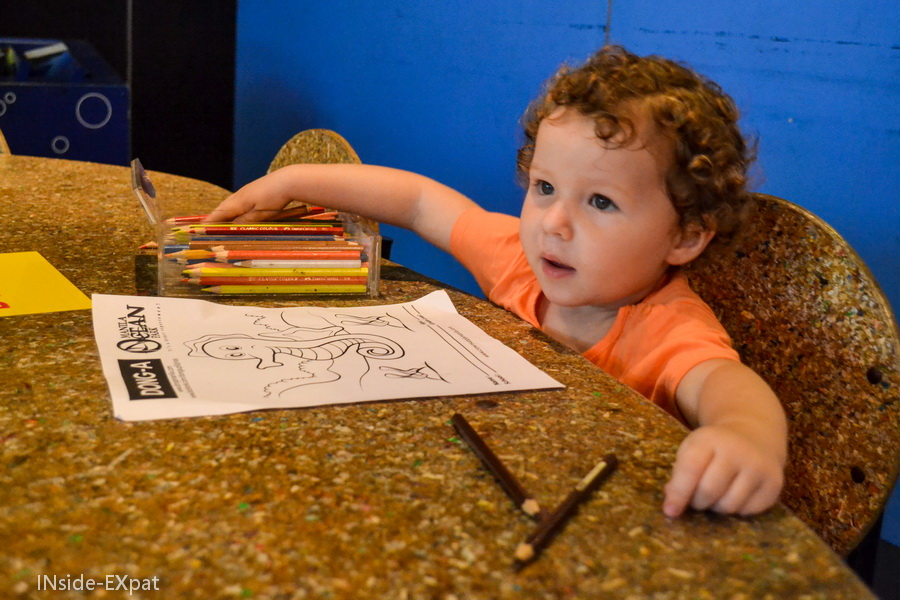 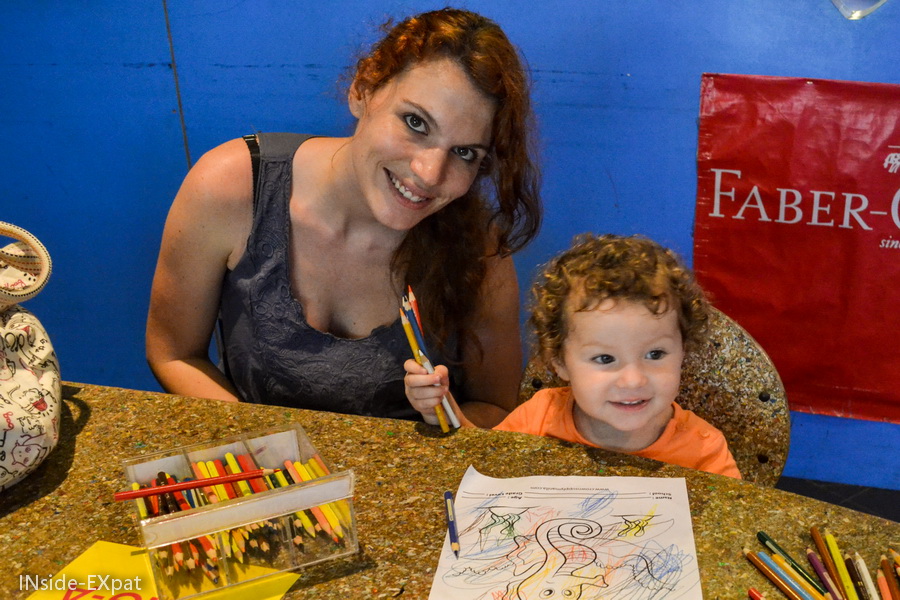 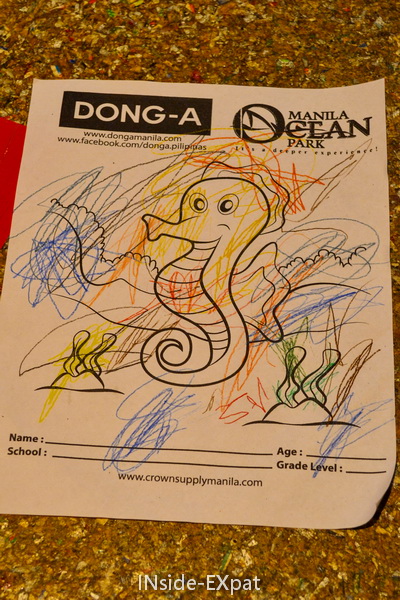 To get there, we pass by an outdoor way overlooking the sea. 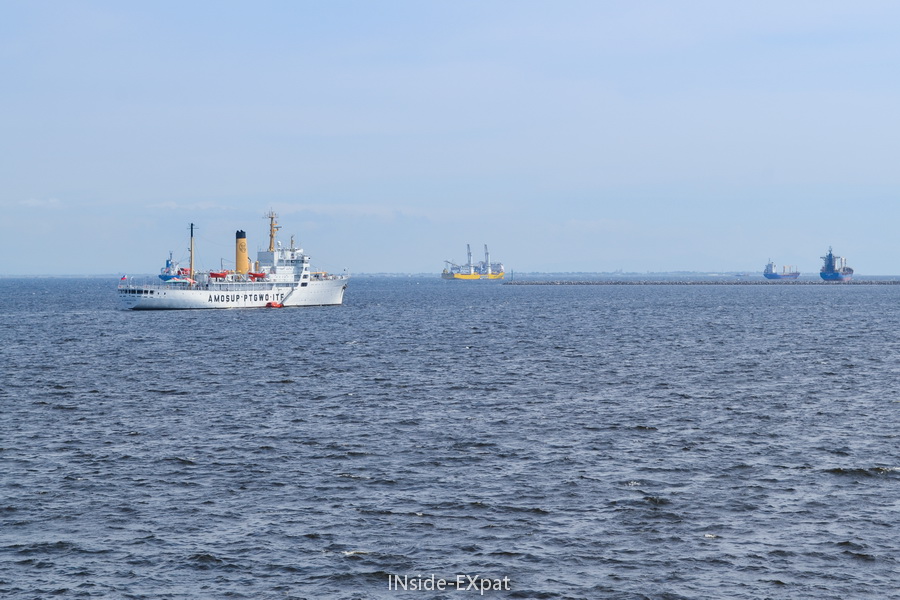 Here again, there is nothing very impressive. One spot with rather dirty windows to watch the penguins. Then you can go to the winter village. You must put a jacket and go into a refrigerated room and decorated with a Christmas theme. This was a lot of fun Mimi who was not used to the cold and had not seen snow since her 6 months! But for me, it was not amazing and I still found quite poor the decoration, especially the black rubber mats which were really unsightly. 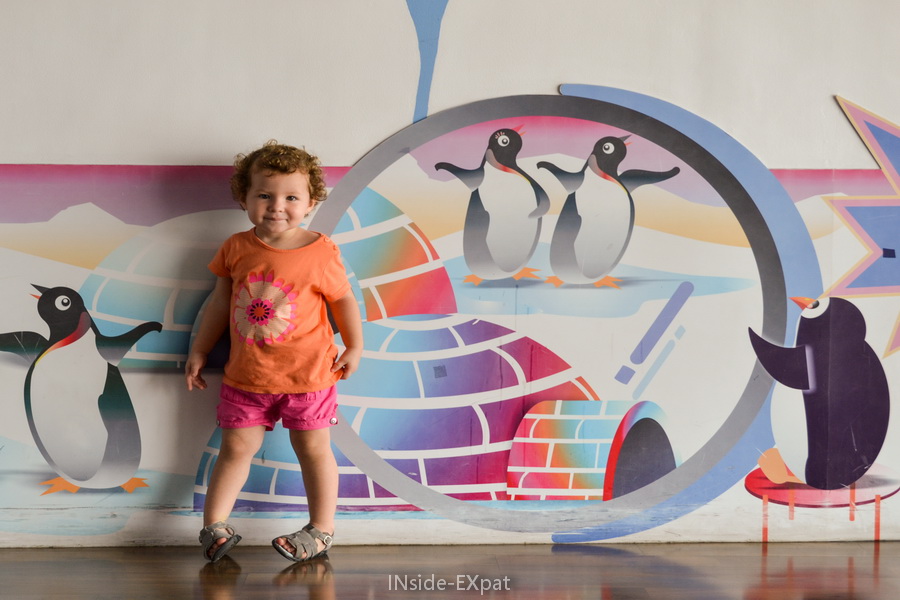 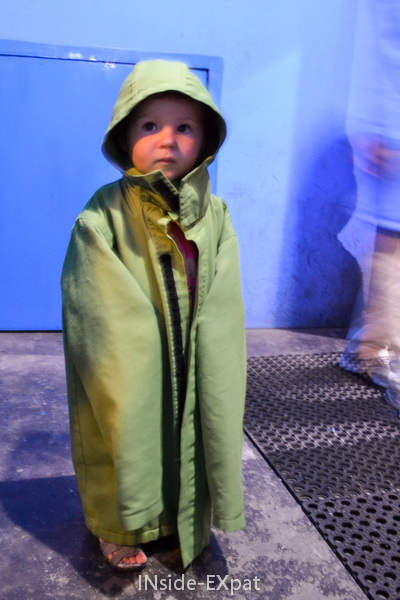 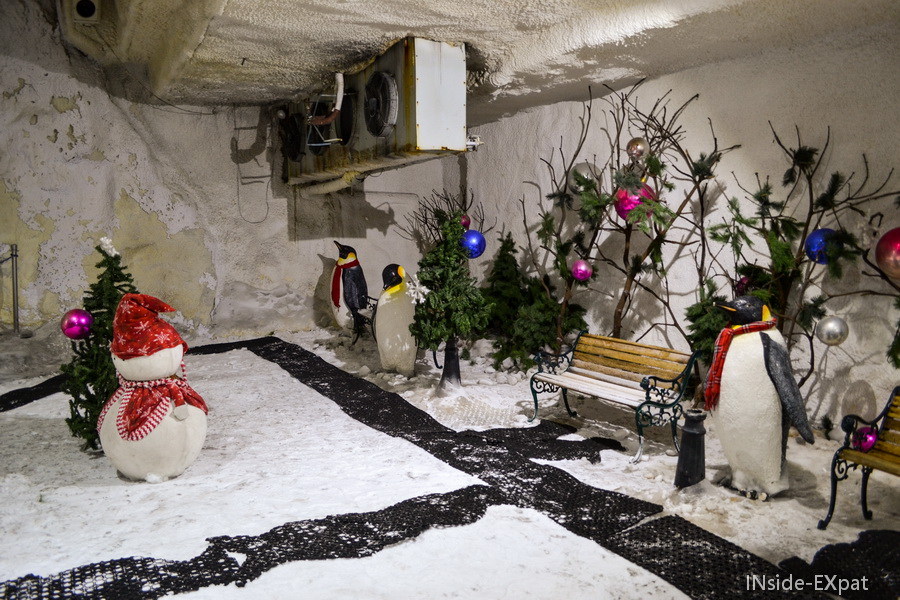 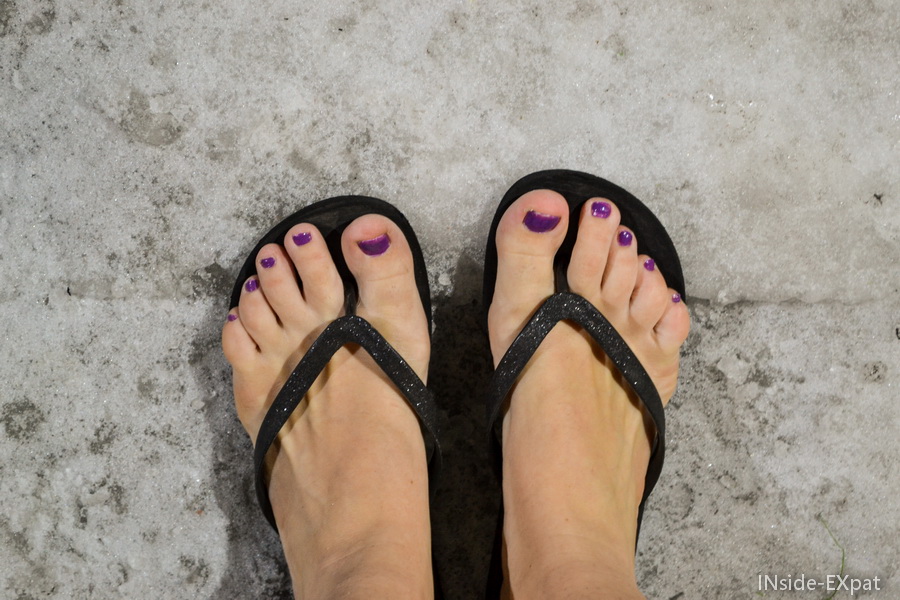 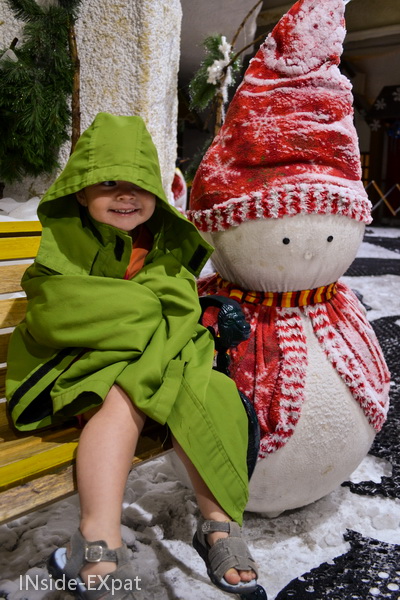 I was expecting a beautiful course with lots of jellyfish of different sizes and kinds. An educational tour to learn more about these creatures that people fear on the beaches but who are fascinating to watch in aquariums. Finally, the exhibit was quite small. To give the impression of spaciousness to the room, mirrors are arranged on the walls. A nice visual rendering with tube aquariums lit in the darkness, but the number of specimens is much smaller than what you can imagine with the pictures. And unfortunately there was no explanation for the visitors. 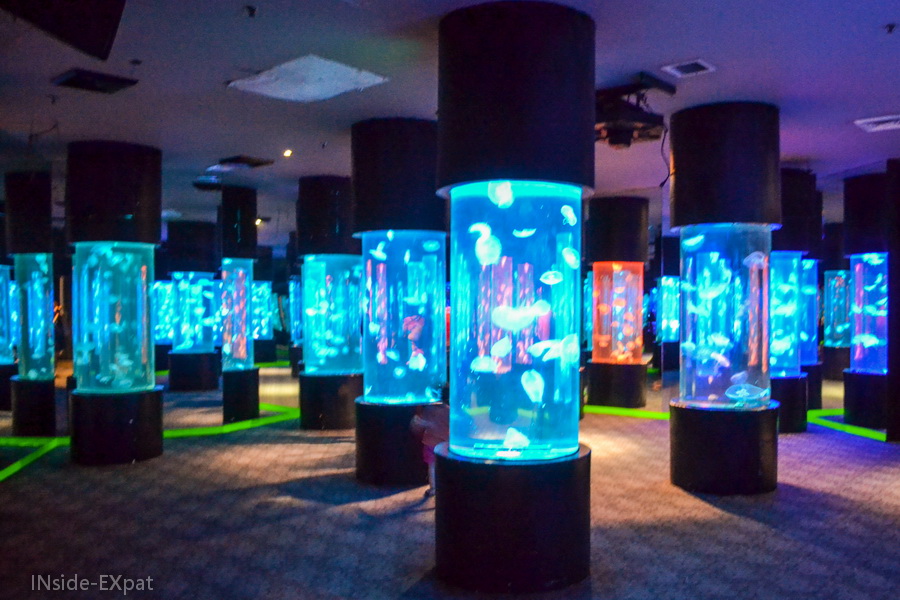 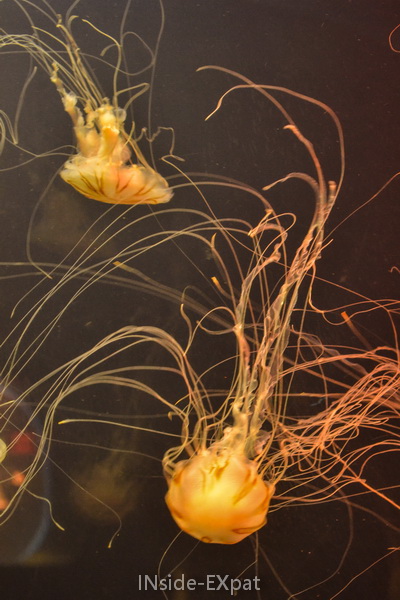 The aquarium is not very well organized in some parts: we struggled to find Jellies Exhibit which was a bit lost in the middle of an area with stalls of toys and children’s rides. Mimi ends her day at the Ocean Park with a ride on a little merry-go-round for 50 PHP (or $1,12) and a vanilla ice cream that she ate outdoors (15PHP, $0, 33). 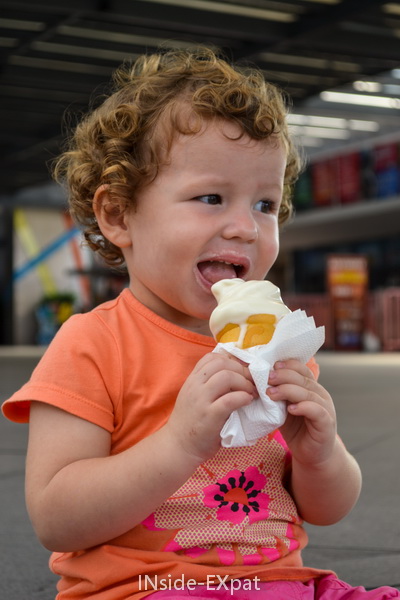 A not-so-easy review for this visit: It is an opportunity for parents who wish to offer their children a break, a recreational half day away from the historical sites of Manila, which can sometimes seem complicated and not always fascinating for the young. But don’t expect to be amazed…

The evening was pretty epic. I went to a mall to do a lot of shopping for the orphanage we visited the next day. The entrance was quite impressive: armed guards searched the bags of every person entering the mall. It was not successfully navigate and find what may be both useful and please the children. With a full cart, it was impossible to drive back to the hotel by tuk-tuk like to go. So we waited at the taxi rank. More than an hour of waiting, a lot of people and few taxis. By observing the people around me, I have come to understand the local technique. I called Alban and asked him to meet me at the taxi shopping center (easier to be outside the mall) and we got together.

We then have dinner at the hotel like the day before.