We love restaurants. Of course we have our favorite ones where we live, in Walnut Creek: The Cheesecake Factory and its huge menu (I already wrote about it), Citra Grill and its simple healthy cuisine, Oyama for sushis, Bombay Indian and its indian specialties, Kevin Noodle’s House for phô noodle soups, Dragon’s Pond for chinese food…

And there are also lots of fast-food places such as In-N-Out for burgers, Taco Bell for mexican food, Yalla for mediterranean dishes and A Sweet Affair for a gourmet sandwich.

Whether we dine in, take out or need a delivery, we trust these places and are loyal customers as they offer a great value for our money.

But, as foodies, we also love to discover beautiful places offering original cuisine, places that are not a copy of what we usually see but have their own atmosphere and identity. We love to know that the chef is really passionate and has the ambition to surprise or impress the customers. In this kind of place, you don’t only go for a meal, but also… for an experience!

My birthday was the perfect opportunity to try one of these places: The Peasant & The Pear.  It ended up being a great choice and it is now on the top of our favorite restaurants list.

A renowned restaurant, thanks to its audacious chef

Since his childhood, cuisine is a passion for Rodney Worth and, before the age of 40, he owns six restaurants in the Bay Area. The Peasant and The Pear is the first one he opened more than ten years ago. Back in 2004, it was only a small sandwich shop in San Ramon, but it quickly became very successful thanks to its innovative menu and the high quality of food. So Rodney kept the name and turned it into an upscale restaurant in Danville. Once again, success was fast and The Peasant and The Pear received, as soon as 2006, its first award as “Best Restaurant” by the Diablo Magazine, a famous monthly publication in East Bay.

Since then, five other restaurants have open and the chef received numerous awards and media coverage. He is now the most titled chef by the Diablo Magazine (with 5 awards as “Best Chef”) and The Peasant and the Pear is mentionned for the third year in a row in the Michelin Guide “San Francisco Bay Area & Wine County”.

Have dinner in France… in East Bay!

If the word “French” is often used as a quality proof to promote a lot of restaurants and food products in USA, it doesn’t always guarantee authenticity, and most of the time the “French” place or product has no connection with France or is just a cliché about my country.

But, just like La Note in Berkeley, The Peasant and The Pear brought us home and we’ve had the feeling, for the time of the dinner, that we were on the other side of the Atlantic Ocean. Right from outside you have a good taste of the atmosphere, as the restaurant looks like a French-styled auberge. We felt in love with this place even before entering it, as the frontage is inviting you to a nice journey in our native country. 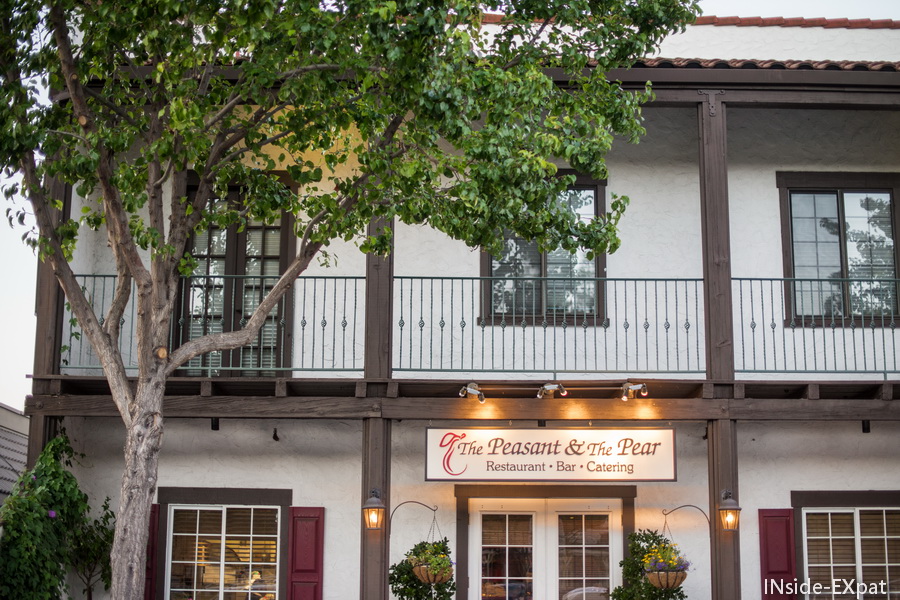 And inside, you have the confirmation that you will have a great time. It really looks like a classic French restaurant, from the organization of tables to the dim lights and the staff’s suits… everything reminded us the standards of a French establishment. We loved the traditional-styled dining room compared to the over-styled, and sometimes even kitschy, decoration that you can find in some American restaurants.

I read a Yelp review from an American girl complaining about the lack of space between tables. On the contrary, I find it very wise as it is closer to the European restaurants atmosphere, but also because it has a good impact on the noise level. Most of the time, American restaurants offer big spaces and even private booths, which is appreciable for a lot of good reasons. But because of that, people seem not to be aware of their neighbors, so they speak louder. At The Peasant & The Pear, you can create your own intimacy thanks to low voices and discreet attitude. We found it very pleasant. 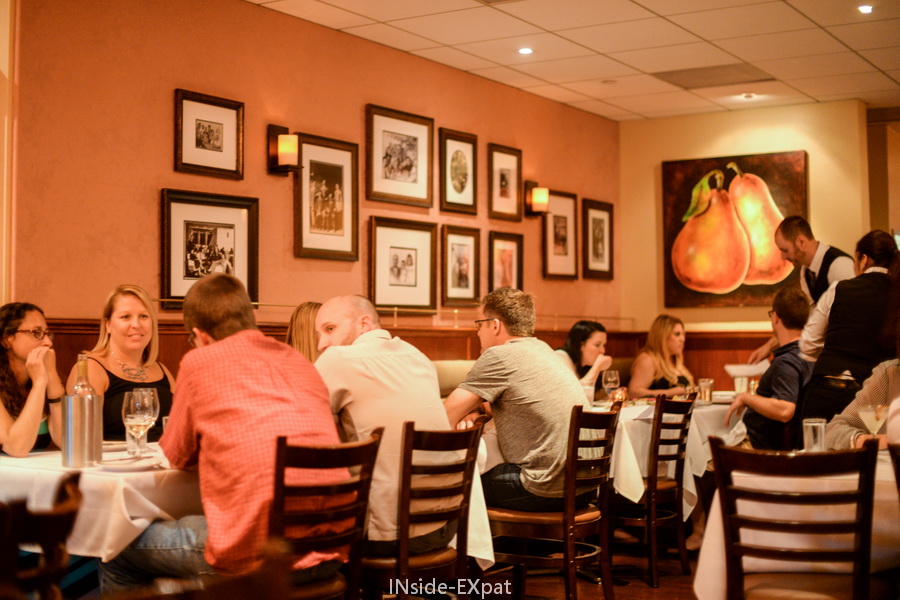 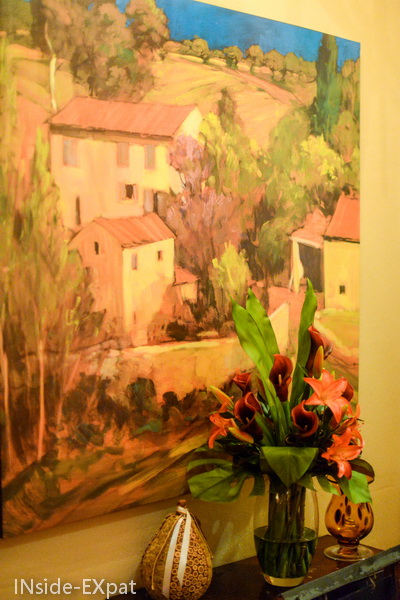 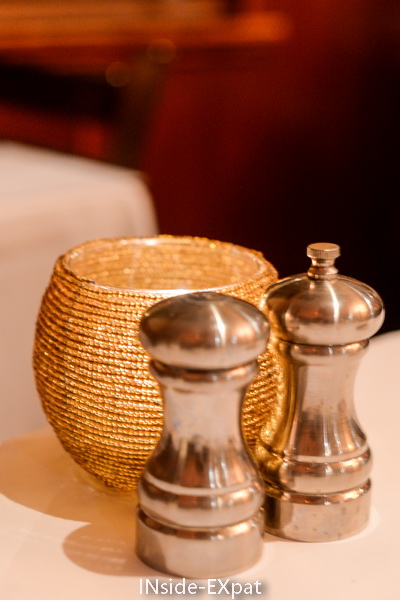 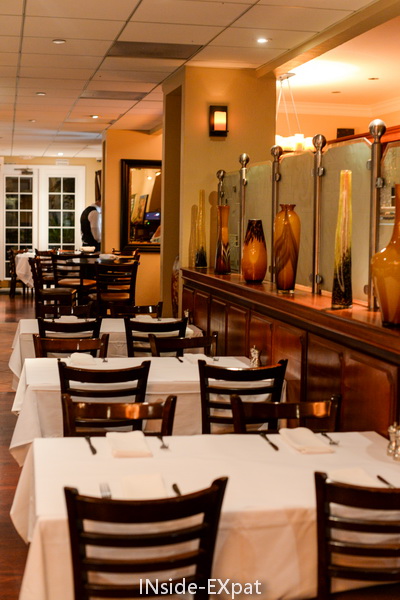 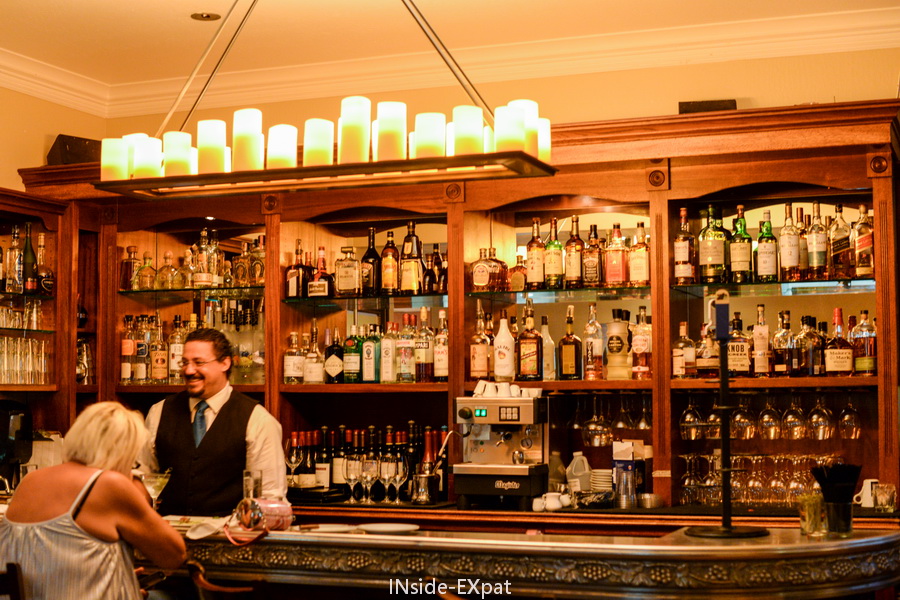 Our diner has been up to the awards won by the chef: the best we’ve had since we are in East Bay.

First we ordered drinks. Daddy B. chose the house specialty: the “Spiced Pear-Tini” (composed of La Poire Grey Goose Vodka, pear liqueur, cinnamon and nutmeg) and I ordered a free-alcohol version of it. They are served with tasty bread and herbs butter. We both found our cocktails delicious and original, a perfect way to begin our evening. 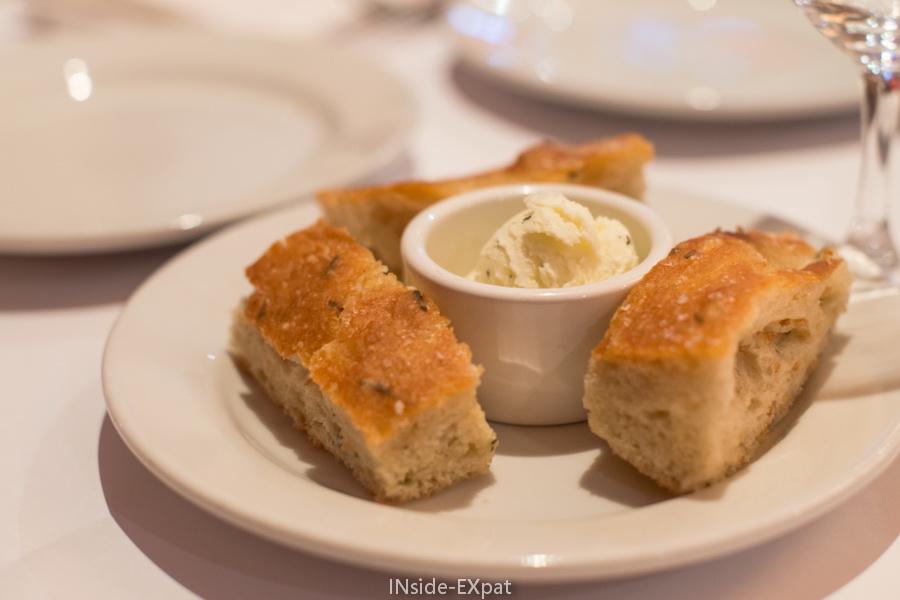 Then we shared a starter: the Burrata. This Italian cheese, quite similar to Mozzarella, is served on crostinis with nectarines and balsamic vinegar. The crusty bread enhanced the softness of the cheese and the flavors were mixed in a perfect balance. 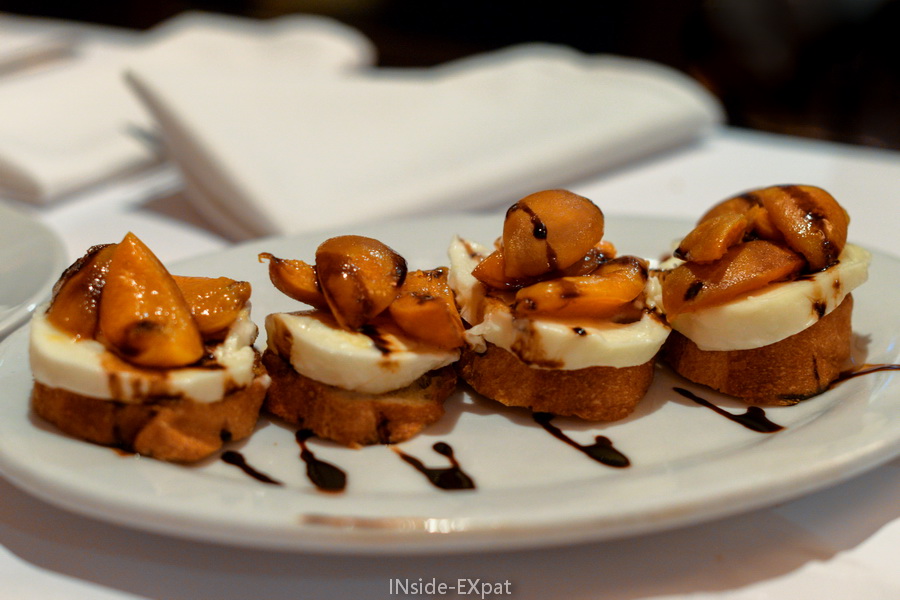 We decided to choose two entrees and share them. We enjoyed a filet mignon served with roasted garlic mashed potatoes and sauteed corn, as well as a lamb shank, slow-braised in Chianti, served with a creamy provolone polenta. The menu was appealing enough so that we had no doubt about this dinner being a feast and… it really was! 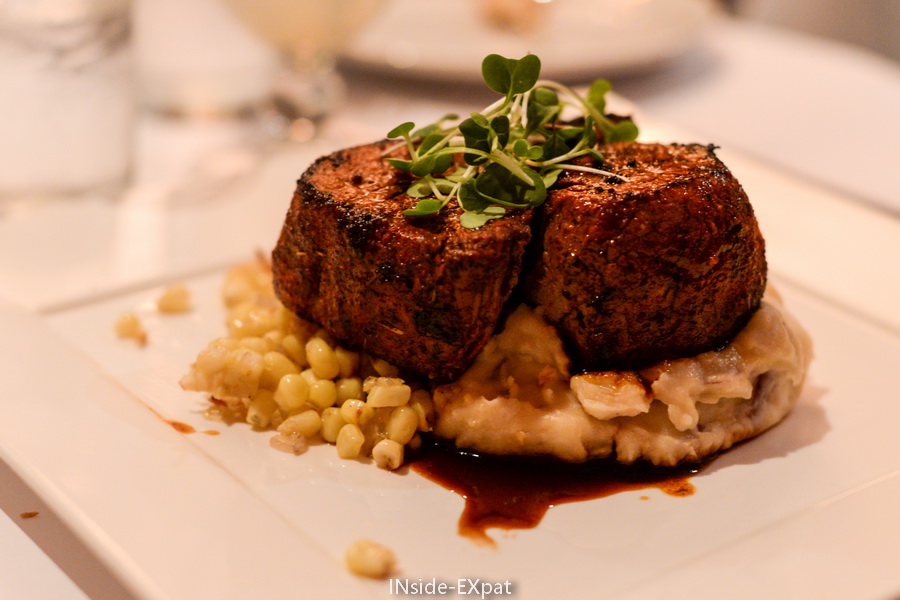 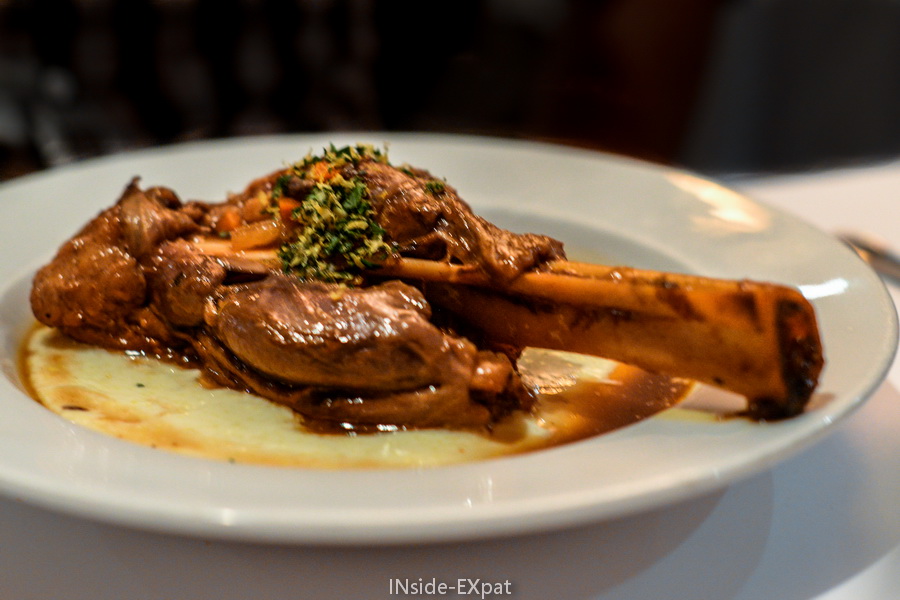 We don’t usually order dessert since we live in USA, as the entrees are large enough to fill us up. But that time, we couldn’t pass on a sweet ending. Daddy B. went for the signature warm pear tart with vanilla ice cream and caramel sauce, and I had a vanilla crème brûlée. It is one of my favorite desserts and this one is for sure the best I ever had: the layer of hard caramel was perfect and the custard was not too sweet. It is really different from the kind of dessert you usually find in American restaurants. 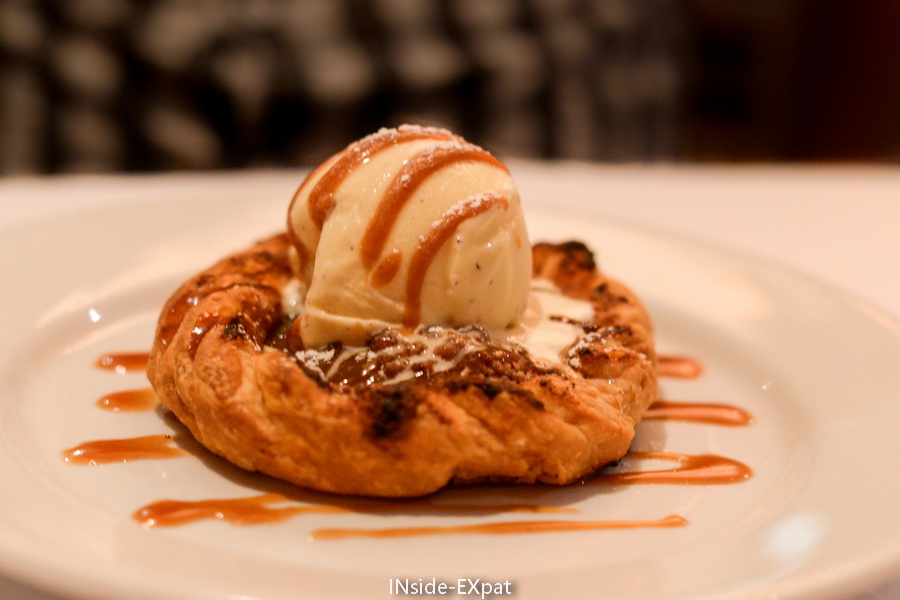 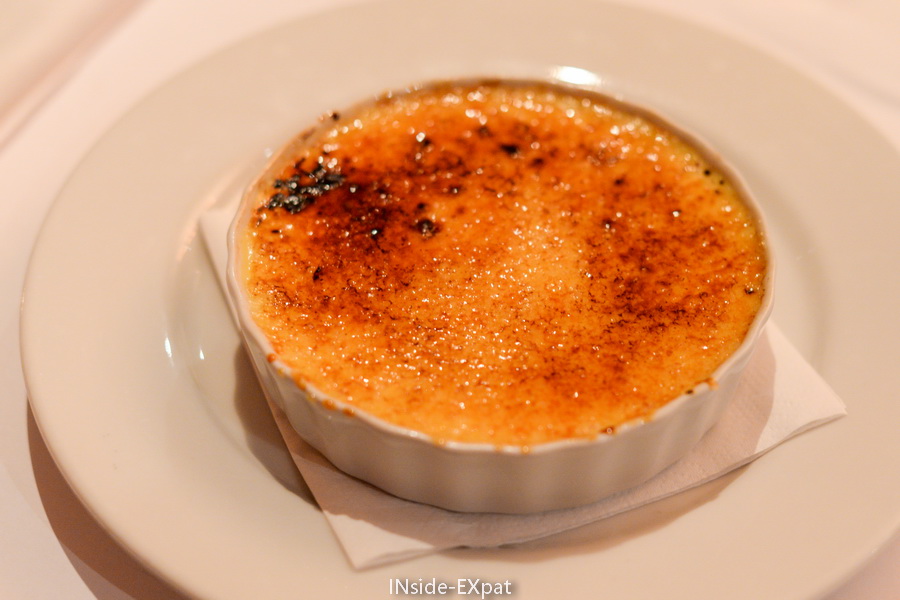 We went there with Mimi B. and were a bit worried about her being welcomed or not in this upscale restaurant. When we arrived we noticed no other children, but our waitress was really nice with her and she brought her everything she needed to enjoy the time spent there. Mimi B. received a paper kid’s menu with simple dishes (she chose the butter and cheese pasta and the mini-sundae) and some crayons to draw on it. She eventually ended up sleeping on the couch while we were finishing our romantic dinner just as if it was just the two of us. 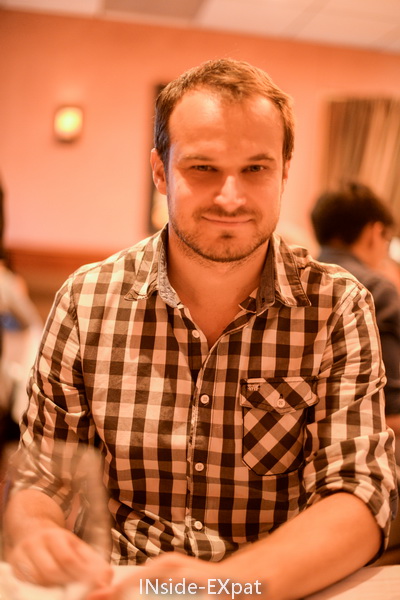 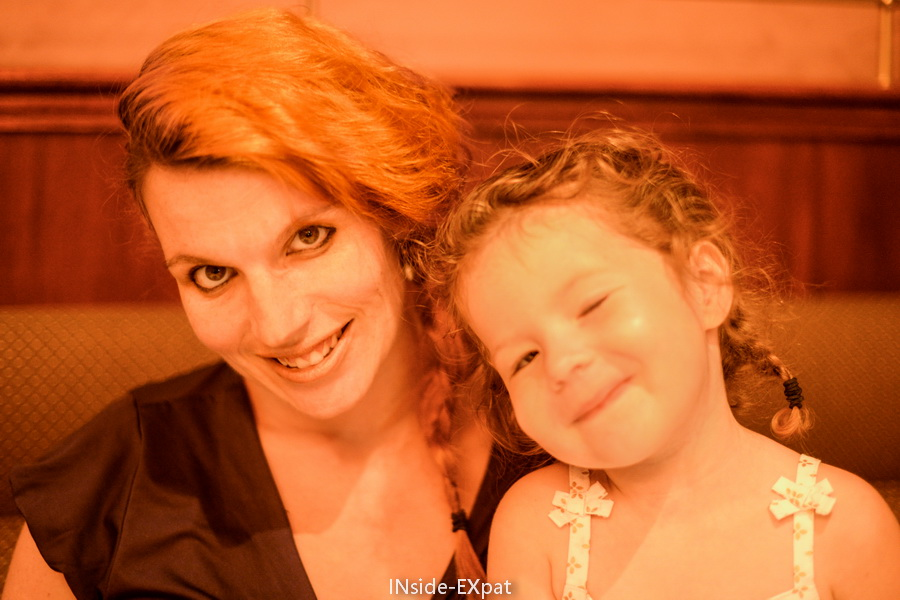 Our waitress has not only been attentive to Mimi B. but also to us. We really appreciated her discreet but mindful attitude. She was always taking time to answer our questions and our needs, without overstaying her welcome.

We chose to sit in the indoor dining room but there is also a charming patio outside with live music on Fridays and Saturdays.

Price was a bit higher compared to our usual restaurants but we chose two of the most expensive dishes as we were celebrating my birthday. Total was $150 (taxes and tips included). It is still an excellent value for money for this kind of restaurant, as French and Italian food are always more expensive than others in California.