We all have a bucket list either in our mind or on a real piece of paper. Thursday night, being expatriate in the USA allowed us to fullfill another dream: attending a Broadway show! Well… not in New York City, but anyway it was in a very beautiful theatre in San Francisco, the Orpheum Theatre. 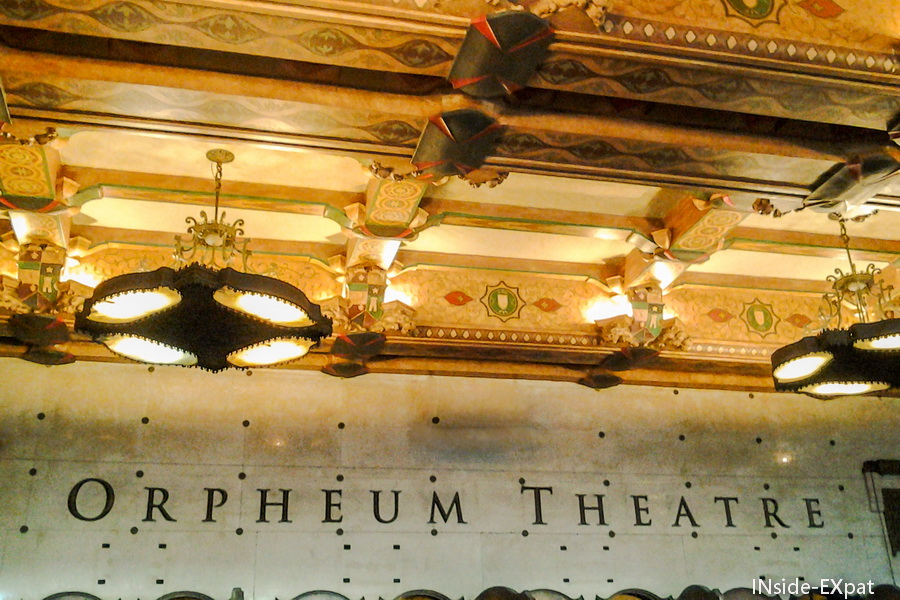 Located on Market Street, this theatre was built on 1926 and patterned after a French cathedral. It was designated as a San Francisco Landmark in 1977, so it is protected like other historic heritages by the City of San Francisco from inappropriate alterations. It is a magnificent piece of architecture where you can’t help feeling privileged to be inside for attending a show. 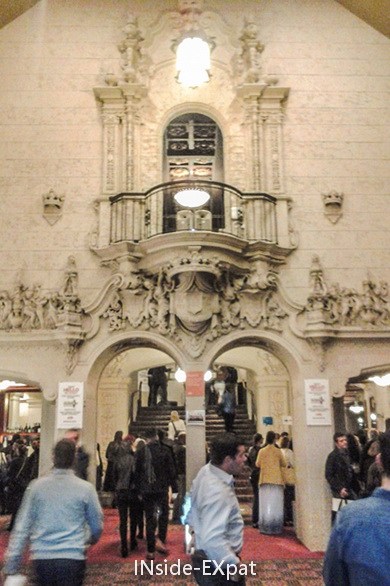 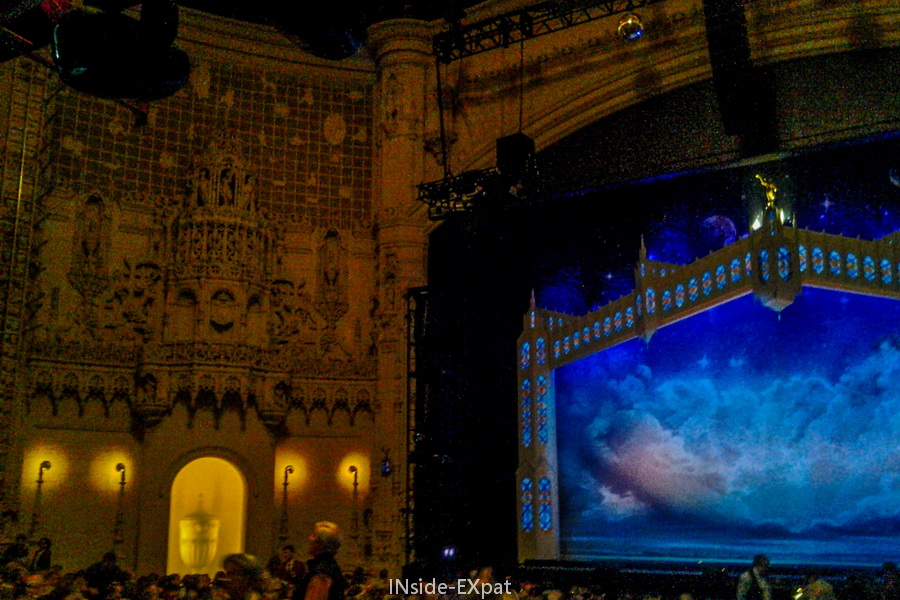 Few weeks ago, we learned that the Book of Mormon will be showed for a while in San Francisco. So we decided to buy our tickets as Daddy B. is totally fond of this musical since we arrived in California. We just couldn’t miss it! 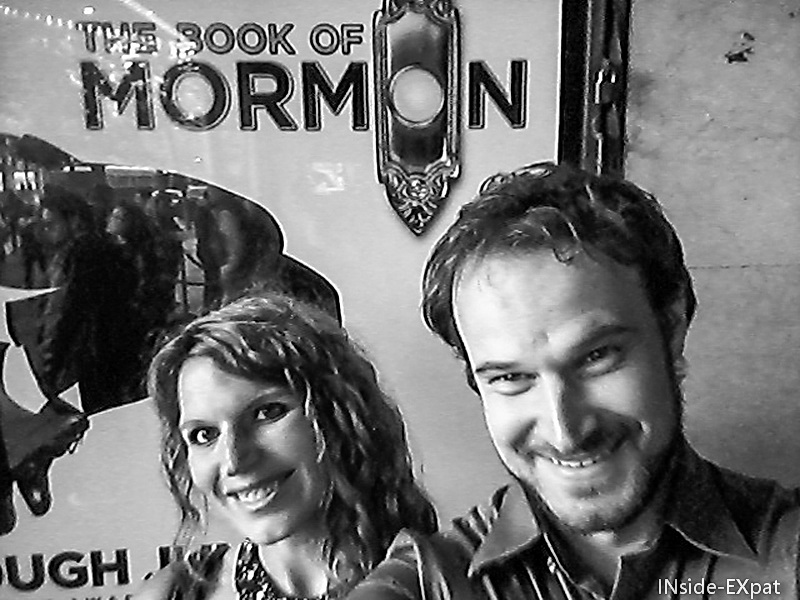 The Book of Mormon is the most irreverent, the most hilarious, the most satirical musical show of the moment! The caustic humor is quite surprising comparing to the other Broadway musicals, nevertheless this show totally fits the standard of perfection that makes the New York art scene so famous. 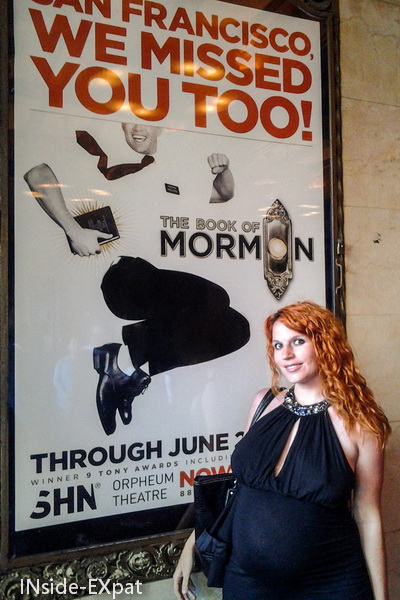 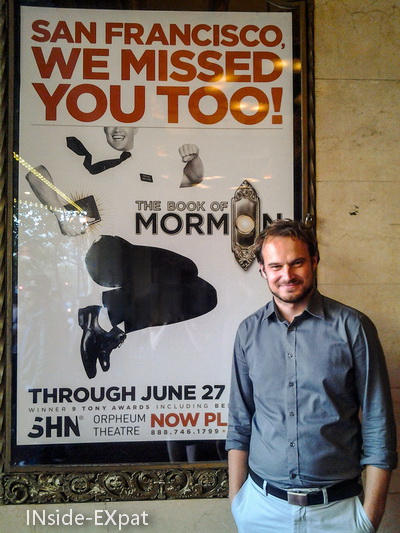 A mix of diverse music styles from pop to Afro rhythms without forgetting some more classical tunes, an astonishing but perfectly choreographed staging, a dynamic and talented cast… Nothing is missing! This musical, rewarded by nine Tony Awards in 2011 and the Grammy of the best Musical Theater Album in 2012, spices up the scene “made in USA” with a contemporary touch and an original script. It is so successful that the theaters where the Book of Mormon is showed are always full!

Just to give you an insight of the atmosphere of the show and the talent of the cast, you can have a look at this short video:

The sharp dialogues and lively songs of The Book of Mormon deal with various subjects like religion, racism, world inequalities or homosexuality. Indeed the musical was created by Tray Parker, Matt Stone (the two creators of the controversial TV Show “South Park”) and Robert Lopez (co-composer and co-lyricist of “Frozen”).

Daddy B., who perfectly knows every songs of the show, advised me to listen the first songs prior to the show, to get used to the particular atmosphere and don’t be too focused on the comprehension of lyrics during the show. And indeed I enjoyed the show more easily thanks to the preview I had.

The story begins in a formation center of the Mormon Church which prepares some young men before they leave for a mission of evangelism around the world. I don’t give you any other clues about the script as you can learn more thanks to the songs and the show!

We spent a wonderful night and we really want to thank our friends Coralie and Bastien who took care of Mimi B. She could not come with us as the theater doesn’t allow any child under 5 years old for this show.

Want to know more? Mummy B. tells you everything!

Attending an appearance of The Book of Mormon:

You don’t have much time if you want a ticket for this show at the Orpheum Theatre as the cast will leave San Francisco after the 27th of June, and the tour will continue through USA. But you can have a look at the different places and dates of other performances. The Eugene O’Neill Theatre in New York City and the Prince of Wales Theatre of London have their own casts which perform all year long.

Before attending a show at the Orpheum Theatre of San Francisco:

You will find several parking places close to the theater. We chose SOMA Grand Parking Garage (1160 Mission Street, 5 minutes walk to the theater). We paid $12 for 4 hours which is quite affordable in SF (in comparison, some closer parking places ask for a $25 flat rate).

We were quite late for dinner so we chose the Market Street Grill of Whitcomb Hotel which is very close to the theater. It is definitely not the best restaurant in San Francisco, but the service was fast and beyond reproach, so it was just what we needed. The Victorian style will please you if you like vintage atmospheres. Don’t miss the hall of the hotel with its crystal chandeliers and marble columns. This hotel is one of the Historic Hotels of America and is renowned for being haunted and being used temporary as the City Hall after the 1906 Earthquake in San Francisco.