On the way to my medical pregnancy appointments, we need to pass by one of the main hospital in Walnut Creek. Since several weeks, some employees are on strike.

The kind of strike that you barely see in France. Indeed there are very few strikers settling on the sidewalk next to the hospital. Among some strike signs, you can see american flags, barbecues and coolers which gave quite a vacation atmosphere to this. 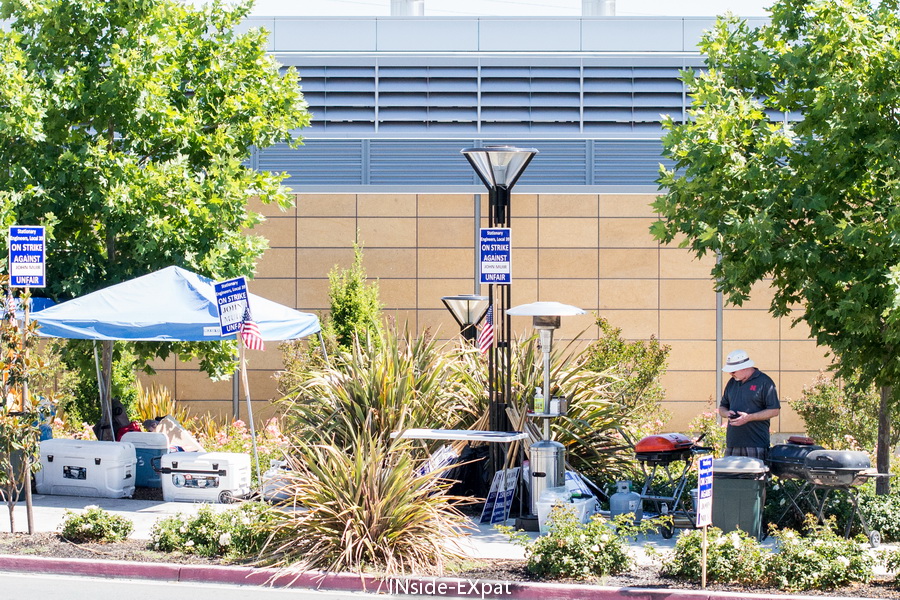 This is so different from French Strikes!

In France, strike can take some incredible proportions and really annoy the everyday life of people. French people know that, at least once a year, teachers will go on strike and it will mean no school for the (happy!) students for one or several days, people will surely also be stucked in train or subway or they just won’t be able to commute because of a public transportation strike, some flights could be delayed or cancelled, trucks could block some roads and even some illegal confinement can happen in some factories… because of a strike! Very recentlysome french taxi drivers (who are on strike against UberPOP) attacked some Uber drivers, their customers and the people who just want to use regularly the roads they are blocking.

In many foreign countries, all of this seems stunning! The violence and agressivity of a part of the strikers give a bad image of France. For some medias, strikes in France means chaos!

Indeed, in Singapore, most of the strikes in France would be declared illegal by the singaporean government. Riots are extremely rare, fastly repressed and strictly punished like the one which happens in December 2013 in Little India.

In United States, it is also different. In a lot of countries, some professions are banned from taking strike actions like policemen, firemen or teachers and both public and private sectors can include a no strike clause to their agreement. But thanks to the “National Labor Relations Act”, the private sector workers are authorized to go on strike if they respect some rules. This document defines precisely what makes a strike lawful or unlawful and it appears that a lot of the strikes which happen in France would be illegal in USA because of the misconduct of strikers. Joining a labor union is also much more restricted in USA than in France, especially for railroad and airport workers.

It’s not easy to have a firm opinion about the right to strike when you come from France where this right is very strong and large. Of course, we can understand the need of expression when a situation seems unfair, but it is complicated to agree with the consequences it can lead to, particularly when we don’t understand the reasons of the strike. Of course the position of Singapore on the right to strike seems too strict, but it is comfortable to know that in United States we won’t be annoyed in our daily life by strikers. It maybe makes us more compassionate with strikers as we don’t have to deal with the consequences of their strike.