Now, I can breathe a little! It’s done! A trip from Paris to Singapore with a connection in Doha and a delayed flight, it took me 24 hours : alone… with my 13 months old baby girl!
I was quite worried by this big trip, but actually everything was fine.
But it was not the same for the family right next to us who had the incredible idea to force their two boys to wear costumes for a Paris-Doha flight! Why??? It is so long for an adult that I can’t imagine how uncomfortable it should have been for two toddlers. As a result, of course, they cried,shouted and were very active for the whole trip.
Compared to them, Mimi B. was like a perfect little girl. She slept very well in her bassinet and was very quiet when she was awake. 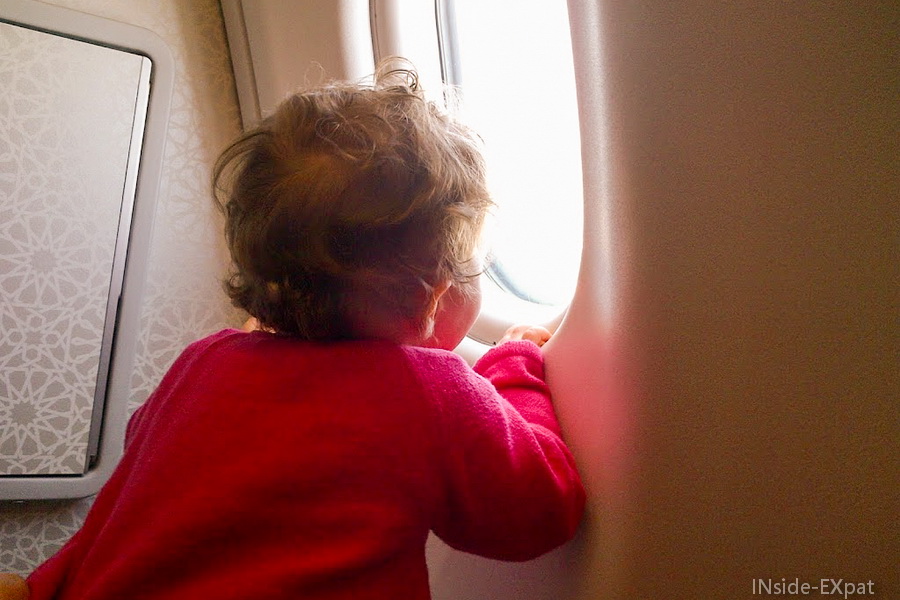 I shared my 10 pieces of advice for flying alone with a baby, here what I can report of my trip :

Indeed Mimi B. slept a long time in the plane. Especially in the second one which was at night. Despite many turbulences during which I had to put her out of the bassinet and buckled her up on my knees, she never woke up and I even slept a little. 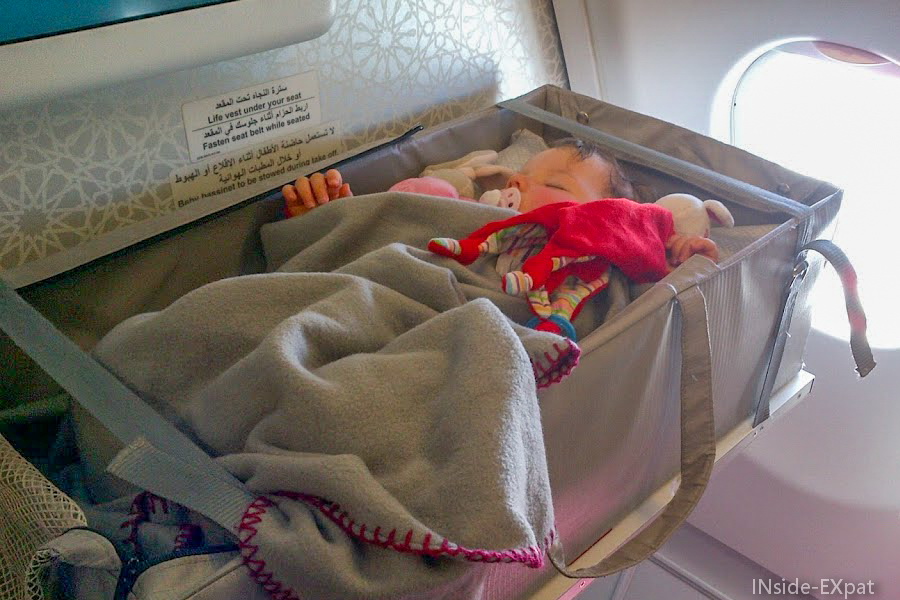 It was really useful. Mimi B. slept in it but also played and stayed quietly inside while I was eating. She had a great view on the other passengers and spent a lot of time waving at them.

We were also so lucky to have an available seat next to us during the first flight. Mimi B. loved to be right next to me for a while. But I won’t buy a seat for her until she turns two and that it is an obligation for her to have her own seat which cost almost the same price than an adult ticket. 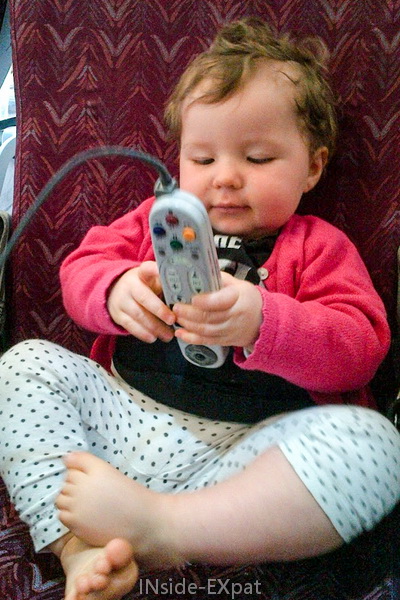 Essential for me. Both of my hands were free to carry all my cabin suitcases (one diaper bag, one wheeled luggage and a sport bag). And I managed to make Mimi B. sleep in it during my connection in Doha (which lasts almost 9 hours!).
I only need to put it off for the take-off as she has to be buckled up to me. That’s the rule (not very well-thought in my opinion as a baby is totally secured in a baby carrying scarf and not so well with just a seat belt) and the staff was quite strict about it (it can be different from one flight to another).

No problem for me. Mimi B. just used her daily need. The restroom in the plane were quite small but it was convenient enough to change Mimi B. without being uncomfortable.

Forget about your eating rules

As I expected, Mimi B. eated only the food she loves. I was always ready to give her a cookie when I felt she was quite stressed or getting too much active. She prefered to eat a thing she love than keep becoming agitated. 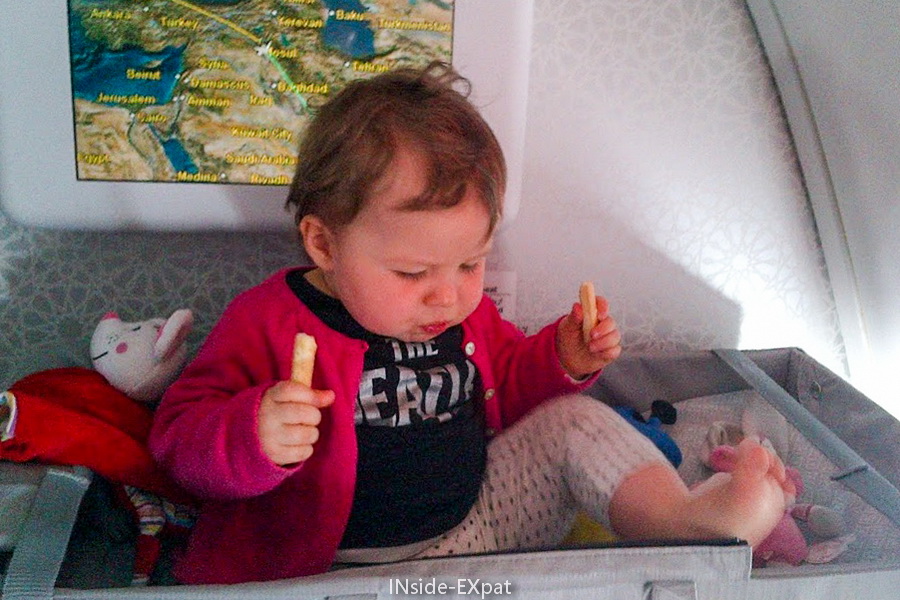 Bring a jacket and/or a blanket for baby

Mimi B. kept her jacket as long as she was wearing her day clothes (she didn’t need it anymore when she was wearing her pajamas). Anyway the weather was quite cold the day of departure in Paris and the air conditioning is always pretty cold too in airport and planes. By night, Mimi B. was wrapped up in polar blankets provided by Qatar Airways, so it was warm enough. Qatar Airways staff supplied one blanket for each passenger. For baby in bassinet, you receive one blanket for the bottom of the bassinet and another one to cover your baby.

if you have a personal blanket that you baby loves, I think it is a good thing to bring it as it can really reassures your little one thanks to its recognizable texture, colors or smell.

Let your child play and run before entering the plane

We didn’t have much time to explore Roissy-Charles de Gaulle airport in Paris and Mimi B. stayed in the carrying scarf until we go aboard the plane. But we had a very long connection in Doha, so we have plenty of time to discover the playground. I wasn’t very comfortable there with all the big children who were jumping, running and shouting and I didn’t find the place very safe for a baby as kids in there were not paying attention to each other.
So I decided to stay next to our departure gate. We met therea very nice australian family. Mimi B. had a lot of fun with the two boys who were 5 years old and 19 months old and i practiced my english with the parents. We enjoyed this moment and it was less hard to spend this long connection time in good company. 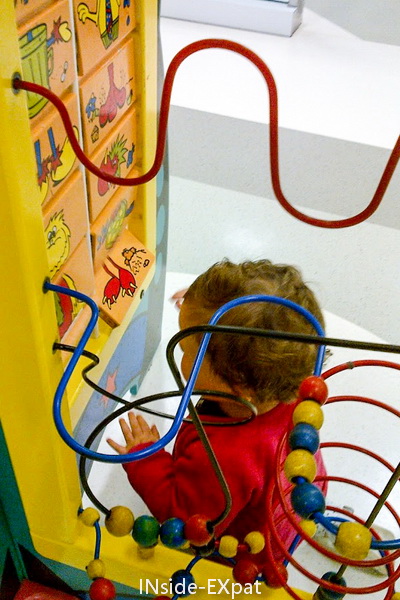 Have a big partitioned bag

And be sure of its weight! Indeed, I was quite annoyed at the airport check-in in Paris because my bags weight were above the authorized 7 kilos. So I had to put off some things so the weight was Ok. I did it very fast as i didn’t want to waste time at the desk… and put everything back when nobody can see me before the security gate! You can imagine the mess it was inside my bags! It was sometimes not easy to find a toy, a diaper or a cookie depending on Mimi’s need, but she was very patient and stayed quiet when I had to look for something she wanted.

Or not… nobody asked me to take off my shoes in Paris or in Doha.

EDIT : But I had to do it a year later for a flight from Paris to San Francisco. So it surely depends on the destinations. Anyway, my shoes stategy is way different now! I always wear the heaviest shoes so thay won’t make my luggage too heavy!

Hopefully, it was not as hard as I thought! So I stayed calm most of the time, even if they were quite annoying at the check-in in Paris (not only strict about the rules but not very friendly too…). But for the rest of my trip I find the staff of Qatar Airways very nice and some passengers tried to help me too. I always find somebody who was willing to help me carrying my suitcases, watch Mimi B. when I need to go to the restroom or show my the way when I was quite lost.

Feel free to add your own tips for flying with a baby in the comments!

Moving abroad in 6 steps : from Singapore to San Francisco